This is a cross-post from Paul Canning’s blog 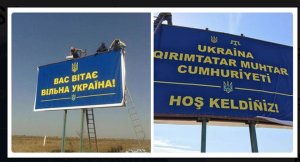 Newly erected hoardings on border. Left: On your way to Crimean Tatar Autonomy. Right: On your way from Crimea to Free Ukraine. Via Olga Klymenko.

Although news about the situation of Crimean Tatars is rarely in mainstream media the potency of their fightback for the Kremlin is described in this post. See also Paul Goble on the reaction to the current blockade of the peninsula initiated by the Tatar leadership. Their importance in the information war can be seen in their vile treatment by pro-Kremlin trolls. See, for example, this attempt to fictionalise Tatars fighting for the Nazis in WW2.

For the second time in a week, the de facto authorities in Russian-occupied Crimea have publicly claimed via Russia’s official RIA Novosti that Crimean Tatar leaders are recruiting Crimean Tatars to become Islamic State fighters. The allegations are especially ominous given Russia’s current military involvement in Syria which Moscow asserts, in the face of considerable evidence to the contrary, is directed against the Islamic State. They also coincide with the latest unexplained siege by armed enforcement officers of the predominantly Crimean Tatar Ak-Mechet suburb of Simferopol and the ongoing offensive against the Mejlis, or Crimean Tatar self-governing assembly.

On Oct 9, Ruslan Balbek, deputy prime minister of the de facto government in Crimea asserted that the leaders of the Mejlis, and particularly Mustafa Dzhemiliev, had, as Crimean politicians, encouraged the development on the peninsula of radical religious sects, whose militant ideology was alien to most Crimean Tatars. “Therefore now, having settled in Ukraine, they have surrounded themselves with Crimean radicals who during various years [sic] fought in the ranks of the Islamic State, and after Crimea’s re-union with Russia left the peninsula.” Balbek specifically claims that Dzhemiliev is recruiting ‘radicals’ for the Islamic State, and that he has encouraged Crimean Muslims to take part in ISIS in order to “later use their military experience for subversive activities in Crimea”. 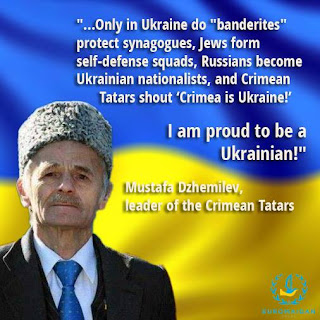 71-year-old Mustafa Dzhemiliev’s defence of Crimean Tatar rights and Ukrainian democracy and his unwavering commitment to only peaceful protest, have earned him immense respect throughout the world. As well as numerous international awards, the veteran Crimean Tatar leader and Ukrainian MP has twice been nominated for the Nobel Peace Prize. It seems safe, therefore, to assume that outside Russia the allegations will be dismissed as scurrilous lies.

The concern is about the purpose of such inflammatory claims and their impact on an audience in Crimea and in Russia which receives its information solely from state-controlled media.

There can be no suggestion here that the state-controlled RIA Novosti is simply reporting Balbek’s words. The agency refers dismissively and wrongly to the Mejlis as “an organization unregistered in Russia” and claims that both Dzhemiliev and the Head of the Mejlis Refat Chubarov “left Crimea”, and were later banned entry to Russia for five years “because of their extremist statements, inciting ethnic enmity”.

Pro-Kremlin media have been particularly active in hurling mud at the Crimean Tatar leaders since they initiated the Crimea Blockade now into its third week. There were initial attempts to mention only ‘Ukrainian radical nationalists’ as involved in the blockade. Then on Oct 5, one of the few Crimean Tatars who chose to cooperate with the Russian occupiers, Zaur Smirnov claimed that Islamic State recruiters had fled from Crimea to (mainland) Ukraine, and were now actively recruiting Ukrainian Muslims. “He excluded any possibility of their returning to Crimea”.

Once again RIA Novosti can be relied on to provide a highly contentious version of events. It claims that “Crimea became a Russian region after a referendum held in March 2014 in which the overwhelming majority of inhabitants …. voted to join Russia” (see: Even Russian human rights body finds Crimean referendum falsified) 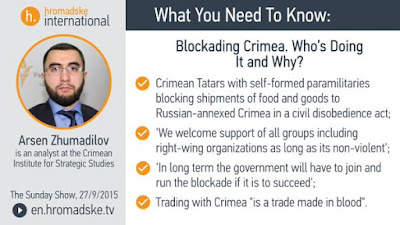 The rest of the brief report returns to Smirnov’s claims that “radicals implicated in Islamic State left the peninsula after reunification with Russia”.

Thousands of Crimean Tatars, as well as other Ukrainians, were forced to flee Crimea after Russia’s occupation of their home. Attempts to deny legitimate opposition to annexation, claiming that opponents are ‘radical Muslims’, are a brazen – and menacing – distortion of the facts.

None of it, unfortunately, is new. The first signs that Russia was seeking to use growing fear of the Islamic State and ‘Muslim radicals’ for its own benefit came in early Autumn 2014. News that Russia’s Justice Ministry wanted to get the renowned human rights organization Memorial dissolved coincided with a defamatory TV programme alleging that Memorial was cooperating with terrorists and radicals now fighting for the Islamic State.

Media reports appeared which painted Crimean Tatars as ‘radical Muslims’ who could unleash a wave of violence in Crimea. On Oct 8 a particularly sinister article entitled “Islamists in Crimea are getting up to something” appeared in the Russian newspaper Nezavisimaya. It begins with the words: “Fighters schooled by war in Syria and Novorossiya are amassing on the borders of the peninsula” (more details here Bogus claims of ’Muslim radicalism’ as weapon against the Crimean Tatars. )

Mustafa Dzhemiliev reported within a month or so of annexation that Russian FSB [security service] officials were quite openly watching Muslims in their mosques, and it was not long before armed searches of Crimean Tatar homes, mosques and religious schools began. Russia has increasingly used its excessively broad legislation on so-called ‘extremism’ against Crimean Tatars and all opponents of Russia’s land grab.

On August 14, 2015, FSB officers turned up at the Mosque in Ai-Vasyl [Vasilyevka] in Yalta to install video surveillance. They claimed that this was needed to ‘counter terrorism’, although the Crimean Human Rights Field Mission points out that no legitimate grounds were provided.

It remains unclear why police and OMON riot police have effectively surrounded the ak-Mechet district of Simferopol for two weeks, with armed officers appearing at people’s homes from 7 a.m., checking documents, copying out phone numbers, etc. There were so-called ‘anti-terrorist exercises’ in early April, with those obviously targeting Crimean Tatars. There have also been suggestions that Muslims will be called in for so-called ‘prophylactic talks’.

It is fairly widely feared that through its bombing of mostly non-ISIS targets in Syria and open support for Syrian dictator Bashar Al-Assad, Moscow will face retaliation within Russia. This probably is a real risk from President Vladimir Putin’s latest political game, making the renewed attempts to gain mileage against Crimean Tatar opponents of annexation particularly cynical and dangerous.