In his latest article for the Telegraph, Andrew Gilligan reveals more about Corbyn and McDonnell’s connections with the IRA.  Taken in isolation, some of the points might perhaps be countered – publishing a letter, for example, does not necessarily imply endorsement of its contents.

According to an authoritative parliamentary reference work, Mr Corbyn was general secretary of the editorial board. He wrote the front-page story in the same issue of Briefing.

The same edition of Briefing, for December 1984, carried a reader’s letter praising the “audacity” of the IRA attack and stating: “What do you call four dead Tories? A start.”

But much of the article is directly focused on the positions and statements of Corbyn and McDonnell themselves, and (given what is claimed) it is not surprising that many find this a shocking and damning report. 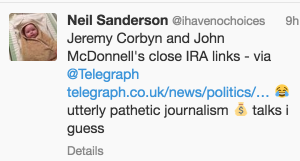 I now see that a Corbyn supporter has latched on to just that detail I identified as inadequate in isolation to prove the thrust of the article’s argument.  Daniel Finkelstein puts her right here. 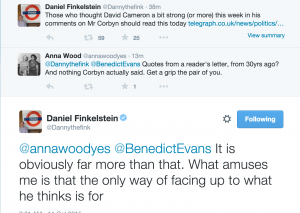