Whether you’re killed by a bullet fired by the greatest sniper in the world or by a screwdriver held by a 16 year old girl you’re dead just the same. So to the victims and those touched by tragedy over the last few days the amateurish nature of the current form of terror will come as scant relief. Nevertheless it’s worth pointing out the fact that the perpetrators are amateurish nonetheless.

Coming largely at the hands of a mixture of Palestinian and Israeli Arab youths armed with nothing more than kitchen knives and screwdrivers this is hardly the wave of bombings and shootings that made the second Intifada such a bloodbath. Therefore it is reasonable to argue that Israelis can take some comfort from the fact that it doesn’t look like the kinds of casualties suffered in the past are on the way.

The human bomb, the Kalashnikov and the rocket propelled grenade have been a rare sight so far. What Israelis are up against are amateurs making the decision to die in the attempt of killing and don’t seem to be especially bothered as to whether they’re successful or not. The longer this wave of attacks continues the less damage they seem to be inflicting. An attempt earlier today in Afula is a good case in point. A woman was shot after her attempt to stab a soldier failed, no Israelis injured.

The truth is that the wave of discontent Israel is suffering at the moment is just that. The one “professional” attack that we’ve seen so far was the Hamas shooting attack on the Henkins, a couple who were shot to death as they were driving home with their children in the back of the car. The Hamas cell who perpetrated that attack has already been arrested.

One wonders just how long this can continue without other, better armed Palestinian groups feeling the need to get involved. So far though the professionals of the PA are pointing their guns at their fellow Palestinians and still taking orders from Abbas.

Earlier today on the Gaza border IDF soldiers killed six civilians who were among a large number of rioters making their way towards the fence separating the Hamas ruled territory from Israel. Nothing symbolises the connection between the first Intifada and the current wave of violence as large numbers of demonstrators clashing with the IDF. This juxtaposition of heavily armed troops against civilians armed with slingshots and stones is what symbolised the first intifada. But even in this respect the current turbulence appears lacklustre.

There is little that happens in the Gaza Strip that isn’t either approved by Hamas or organised by them directly. A riot didn’t just spontaneously break out on the border between Israel and Gaza those people were sent there. The original Intifada was a spontaneous event that swept through the Strip and the West Bank and encompassed every aspect of Palestinian’s lives. This is a poor parallel of that awakening of Palestinian nationalism, more like a cynical use of activists to make Israel look bad.

The problem with this “amateurfada” is that you never know what’s coming. Every time you walk past a woman wearing a veil or a couple of guys chatting in Arabic you’re tense and wondering if one of them is going to stick a knife in your back. The feeling of security on the streets is gone. You can see this in the reactions of the public. In Afula a mob formed ready to lynch a terrorist and an Arab member of Channel 2’s news crew was punched. Terrorists armed with knives who could probably be disarmed are being shot by jumpy soldiers while being filmed by bystanders whose uploaded films are quickly going viral.

In a very real sense these amateurs have made Israelis afraid to walk the streets. With typically little planning beforehand and little connection to organised terror groups it is devilishly hard for security forces to stop these kinds of attacks. Perhaps they’ll continue perhaps they’ll stop as suddenly as they began.

What is certain is that Israeli casualties will be lower than Palestinian ones and with so many killings being filmed and going viral this will be the most scrutinised terror wave in Israel’s history and that is not likely to be a positive for the Jewish state.

Since writing this piece in the early hours of the morning there have been a spate more stabbing attacks and a declaration of a third intifada has started doing the rounds on Facebook. It is said to be genuine by people in the know. It is a general statement declaring the opening of the third intifada intended to ‘liberate al-aqsa,’ It has the emblems of Fatah, Islamic Jihad, PFLP and PRC at the bottom. If this is real and the PA join in on this and turn their guns on Israel things are going to get a lot more bloody. 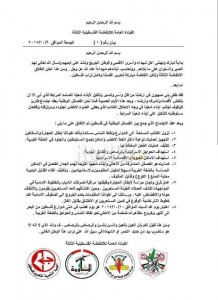