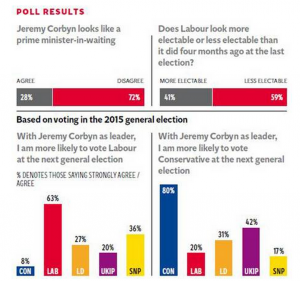 The Independent’s headline focuses on the 20% of Labour voters now more likely to vote Conservative under a Corbyn leadership.  But there are other interesting points to pick out here. Overall the results would appear to boost Tory chances – the individual percentages in the left hand table add up to 154, those on the right to 190.  What isn’t clear from the poll is the possible impact on non-voters or Green voters – presumably quite a few of these would be more likely to vote for a Corbyn-led Labour Party.

More than three quarters of the 80% of Labour voters who wouldn’t contemplate now voting Conservative are actively enthusiastic about their new leader.  This seems broadly in line with the voting results – although £3 supporters were particularly likely to vote for Corbyn, he also attracted strong backing from established members.  However, although the Independent’s headline might seem to focus on the worst element of the poll (from a Corbynite point of view), the chart could be said to understate the problem for Labour.  The bars don’t compare like with like. Given that Labour supporters accounted for 30.4% of votes in 2015, Lib Dems only for  7.9%, a moderate 27% swing from Lib Dem voters to Corbyn won’t begin to compensate for a 20% desertion.

UPDATE – it was being reported earlier that Jeremy Corbyn had given £45 to a self-confessed IRA terrorist to help him flee the country back in 1987.  It now seems that the story was untrue, and that the money was given by a Corbyn staffer – in fact Corbyn apparently contacted the police as soon as he heard what had happened.  The original reports don’t seem to have much perturbed Corbyn supporters who chose (judging from responses on Twitter) to keep quiet as the story gained traction. According to the Sun’s Harry Cole, Corbyn’s team was given a week to comment on the allegations – and (bizarrely) refused to do so.