As recently as the year before last, Honest Jeremy was actively lobbying to help get the convicted terrorist bomber Jawad Botmeh elected as a Governor of London Metropolitan University. 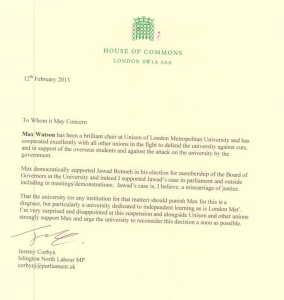 Botmeh was one of the two terrorists who were convicted for attempting to blow up Balfour House, just a couple of miles north of where I live, an anti-Israel terror hit against the headquarters of a group of Israel charities and NGOs.

He was sentenced to twenty years.

Here is a list of the main evidence against Botmeh:

LMU is notorious for its record of having student Islamist FOSIS officers who are found to have terrorist connections or themselves get convicted as terrorists….

The other thing about this recent campaigning is that it would disprove any PR line that Corbyn has become more politically mature and responsible since he was a young MP.