If this poll is anywhere in the ballpark, there is absolutely nothing outrageous enough that Donald Trump can do or say– no criticism harsh enough from other Republicans– that undermines his support among a very large share of the GOP electorate. 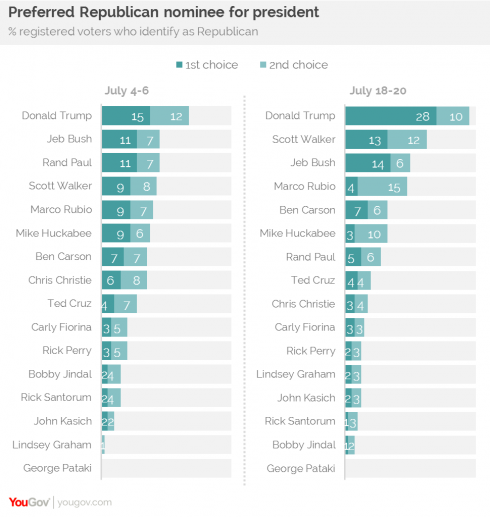 But don’t worry, anti-Trump Republicans: there are a still a full 62 percent of GOPers for whom Donald is not the first or second choice for the party’s nomination for president in 2016.

(What’s amusing to a non-Republican is how “respectable” anti-Trump Republicans helped create the circumstances that made it possible for a clown like Trump to emerge and dominate the Republican race. Trump is simply taking standard Republican talking points on immigration and other issues, and magnifying them to the nth degree.)

And, really– you have to be impressed by his no-holds-barred attitude toward his enemies (real or imaginary):

Just imagine a president who would deal with America’s enemies like this.

Mr. Trump’s criticism of Senator John McCain’s war record one week ago at an Iowa forum set off a furious round of attacks between him and other Republicans. On Saturday, he said he felt free to add [Wisconsin Gov. Scott] Walker to his hit list after a Walker supporter called Mr. Trump “DumbDumb” in a fund-raising appeal.

He went down a list of criticisms that seemed the result of an overnight opposition-research effort. “Wisconsin is doing terribly,’’ he said. “The roads are a disaster because they don’t have any money to rebuild them, and they’re borrowing money like crazy.’’

He cited figures for the state’s budget deficit. “I wrote this stuff all down but I don’t need it because I have a really good memory,” he said.

He also accused Mr. Walker of flip-flopping on the Common Core education standards, having once supported them. “Scott Walker changed when he saw he was getting creamed, so now he’s not in favor,’’ he said.

Mr. Trump gave $10,000 to Mr. Walker’s re-election campaign last year, something he alluded to in a meandering, backhanded way: “I’ve been nice to Scott Walker,” he said. “He’s a nice guy. He came up to my office three or four months ago and presented me with a plaque because I helped him with his election. I liked that he was fighting.

“I didn’t know what the hell he was doing, but he was fighting, and I like a fighter,” Mr. Trump added. “Does that make sense?”

To a surprisingly large number of people, it does.