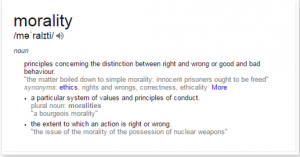 A small disclaimer to start:

It’s a big question, isn’t it? Possibly the biggest of them all. I’m not going to link, cite or express any opinions other than my own (excepting the definition above). This is a summary of what I think morality is and where it did, and didn’t, come from. As such, this has been difficult to think about and I wouldn’t be at all surprised if I get some things wrong. Obviously, I haven’t been dropped in from another planet, so this will be the summation of all the things I’ve heard, read or experienced thus far in my life. This is mostly for my benefit, to get my current thoughts down, but I’ve published it anyway. Enjoy! Or not!

The above definition is a starting point, but I’d refine it as:

A moral action is an action which causes the greatest good (or minimises the bad) to creatures that can suffer pain (with an emphasis on humans).

I think this is pretty clear. Make decisions which cause greatest good, or least harm. Of course, people’s idea of what good and harm are can be very different.

Where did it come from?

Theists, of course, say it came from God. That’s begging the question. If we go to the place we’ve reliably found answers during human existence, we can see where it came from:

The natural world – it’s clear from the behaviour of other animals (especially higher primates) that empathy exists ex-humans in nature. This empathy (which is born of a selection advantage in evolution) is the building block for equity and altruism. This, in turn, has been enhanced by the human mind into morality; a much more complex beast.

Since humans first formed civilisations and threw off the shackles of the barbarism of nature, morality has been developing and slowly (and not bloodlessly) improving.

This is not new to anyone. The sticky question in today’s world is who’s right? Who’s wrong? Should we impose our standards on others? etc. If you don’t, you’re a relativist; if you do, you’re some sort of colonial force. If, like me, you believe in universal human rights, it’d be handy if an objective standard existed.

Is morality absolute? Relative? Subjective? Objective? Some of these? None of these? Here’s my hypothesis:

Morality is certainly changing (trending to improvement), so it can’t be absolute. Slavery has been abolished largely. This is because the majority came to understand this was unjust. Obviously, at one time, it was considered normal and, at least, amoral.

It’s also objective in that a standard, or benchmark, exists outside one human’s mind.

It exists in the human collective of knowledge and experience. A sort of average morality of all humans (I know this sounds a little woolly). It’s intangible, but becomes tangible when codified in laws. 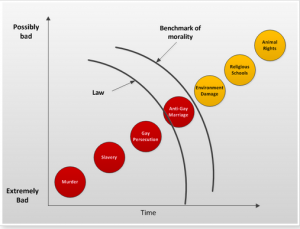 Imagine that benchmark of morality moving away from the origin over time. It is sweeping up those issues, turning them from moral/amoral into immoral. The issues in yellow (chosen by way of an example) are still being debated. Those issues in red, codified (or being codified) in various laws. The Law line follows behind. Sometimes a long way behind!

As this is a human endeavour, what is pushing the line line forwards? It’s humans obviously, but whom?

I, very broadly, separate all humans into one of 3 types:

1. Activists – This category includes moral philosophers, suffragettes, abolitionists, human rights campaigners, some politicians, etc. These people are actively thinking about moral questions and pushing movements forward. Lots of these people don’t live long enough to see the moral benchmark sweep up their cause, but they’re posthumously vindicated. This also includes people who are wrong about their cause, because this sparks a greater reaction in those who are right. These people push the benchmark forward. Of the world’s population, only a small percentage are activists.

2. Followers – People who accept the changing moral landscape and adapt their behaviour accordingly. This is the catch-all for people who aren’t activists and aren’t in the third category. This is, by far, the biggest category.

3. Laggards – These people have a retarding effect on the benchmark. These are conservative (small ‘c’) individuals who are usually moral absolutists. Moral absolutists are usually religiously inspired and believe the morality was given to us by God, and is perfect. They fight, mostly metaphorically but sometimes actually, for benchmark not to move, and in some cases, actually regress. Laggards don’t always really want the morality they’re espousing, but their dissonance is such that they feel the need to defend their divine morality. Some Laggards do want this morality – ISIS, for example. Morally, these people are anchored to the spot as the benchmark moves away from them. They can only fill this void with protest (sometimes violent) and apologetics for the view they hold. This is a fairly sizeable section of the population and mostly those with orthodox religious views.

What you end up with, after the interaction between the Activists and the Laggards, is the rate of change of the moral benchmark.  The beauty of our objective morality is that it’s a self correcting system based on reason and outcomes. Topics are visited and revisited and cases are put forward with the latest evidence and thinking. As a species, we are improving, moving forward and making the world a more equitable and just place to live.

How to improve the benchmark and hence the well-being in the world? Support the Activists (or even become one) and encourage the Laggards to Follow.