Many of you will have seen Theresa May’s speech today.

“I know that many Jewish people in this country are feeling vulnerable and fearful and you’re saying that you’re anxious for your families, for your children and yourselves,” she continued.

“And that means we must all redouble our efforts to wipe out anti-Semitism here in the United Kingdom,” she said. 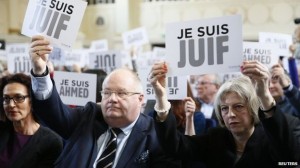 Luton would be one of many good places to start. How about a wave of condemnation of the Luton Islamic Centre?

Here is a lamentation about the “ummah” not being victorious. It is a call to violence:

“And make ready against them all you can of power, including steeds of war (ie weapons) to threaten the enemy of Allaah and your enemy, …” [Al-Anfaal (8):60]

We ask Allaah that He grant us the ability to pursue the proper means for gaining victory over the Jews and over the rest of the enemies of Islaam.

How do the brethren of swine and pigs have the upper hand over the best Ummah among all the other Nations !?

For more on the nefarious nature of “the Jews”, see this bonkers rant:

The jews strive their utmost to corrupt the beliefs, morals and manners of the Muslims. The jews scheme and crave after possessing the Muslim lands, as well as the lands of others. They have fulfilled some of their plans and continue striving hard to implement the rest of them. Even though they do engage the Muslims in warfare involving strength and arms and have occupied some of their lands, they also fight them by spreading destructive thoughts, beliefs and ideologies; such as Freemasonry, Qadiaanisim, Bahaaism, Teejaanism and others – seeking the support of the christians and others, in order to fulfill their objectives.

In this furious denunciation of an interfaith project, one finds vilification after vilification:

“Verily, those who disbelieve (in the religion of Islaam, the Qur’aan, and the Prophet Muhammad sallallaahu ‘alayhi wa sallam) from among the people of the Scriptures (Jews and Christians) and al-Mushrikun (Polytheists) will abide in the Fire of Hell. They are the worst of creatures.” [Al-Bayyinah (98):6]

Indeed, non-Muslims should be humiliated and taxed (the jizya):

“Fight against those who (1) do not believe in Allaah, (2) nor in the Last Day, (3) nor forbid that which has been forbidden by Allaah and His Messenger, (4) those who acknowledge not the religion of Truth; i.e. Islaam, among the people of the Scriptures (Jews and Christians), until they pay the Jizyah with willing submission, and feel themselves subdued.”

Don’t forget that Qadir Baksh, the centre’s leader, turns to the racist horror that is David Duke for wisdom on the Jews.

The open promotion of such vicious hatred while Jews are being murdered just for being Jews is horrifying.

Even if it is and should be allowed under freedom of speech – views will differ on this – British society must do much more to make it social anathema.