This is a cross-post from Kevin Higgins 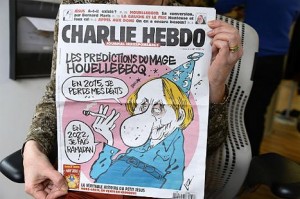 This morning four cartoonists, including the magazine’s Editor-in-Chief, and eight other people were shot to death in an attack on the Paris offices of Charlie Hebdo.

The magazine often ridicules the likes of the Virgin Mary, the Prophet Muhammad, and that general crowd. There are those who think Muhammad, Mary, and religious icons in general, should be beyond such light hearted criticism. In 2011 some religiously minded souls firebombed the magazine’s offices, the day after it rather wittily announced the Prophet Muhammad as its new Guest Editor.

It appears – that is all we can say yet – that today’s fatal gun attack was carried out by Islamists, which is of course not at all the same thing as saying that it was done by Moslems. Your average crazed gunman shouting “Allahu Akbar” generally has about as much in common with his local Imam as Pope Frankie does with the most demented loon to attend one of Youth Defence’s anti-abortion demos in Dublin last year. It could be said that the Catholic church’s stance on abortion gives licence to the crazy fringe elements who go about the place with colour photos of aborted foetuses; as it could be argued that Moslem leaders who do not openly come out and say that a magazine such as Charlie Hebdo has every right to ridicule any aspect of any religion, including their own, are guilty of helping create an ambivalence on this issue which makes it easier for the crazies to pretend, to themselves and others, that they are in some way representative of Islam. You are either for free speech or you are against it; it is, more or less, that simple. About Moslem leaders who unequivocally condemn the murders in Paris but go on to say that they do not believe that a magazine such as Charlie Hebdoshould be allowed publish what it does, it can credibly be argued in mitigation that no organised religion – at least none I am aware of – has ever actively campaigned for the right of others to ridicule it.