According to Georg Christoph Lichtenberg ‘the most dangerous untruths are truths moderately distorted’, and neither Rod Liddle nor Douglas Murray, in their respective recent posts on matters Muslim, gets things completely wrong.

Liddle opens ‘It’s OK to mention anti-Semitic attacks – but not who commits them’ with a droll account of his recent run in with a swan.

The swan had attacked me because it believed — mistakenly — that I was Jewish. There was no other possible explanation. And as I stood, a little shaken, on that riverbank, it occurred too that all of these mysterious anti-Semitic attacks which we’ve been hearing about recently, the attacks in which the perpetrators remain a complete and utter mystery, are almost certainly the work of swans. Why had I not realised this before?

One of Liddle’s premises – that some on the left will determinedly ignore any mention of an intersection between Muslim communities and antisemitism – is true, or partly true.  He invokes Owen Jones, but a worse example was the Guardian’s appalling coverage of Merah’s murders in Toulouse.

After triumphantly establishing the identity of the elephant in the room (and, for all the suggestion that he was breaking a terrible taboo, I doubt there was a single Spectator reader who was surprised to learn what it was) Liddle continues.

This is a peculiar state of affairs, to my mind. Imagine if it wasn’t Muslims or swans. Just pretend for a moment that of, say, 200 anti-Semitic attacks in the UK, a study discovered that 198 of them had been committed by Methodists.

Now, it’s one thing to point out that Muslims may be over-represented in antisemitic incidents and to note that this fact is anxiously overlooked by some on the liberal left. But it’s another to imply that 99% of antisemitic attacks in this country are carried out by Muslims.

After invoking Mehdi Hasan’s post to back up his thesis, Liddle concludes with a reminder of the MCB’s disgraceful refusal to take part in Holocaust Memorial Day. What Liddle doesn’t offer is any evidence to back up his claims about Muslim antisemitism. In the comments, I linked to a CST report which casts doubt on the exaggerated picture he paints.

Another issue he ignores is the fact that many Muslims (not just Mehdi Hasan) are identifying and trying to counter the problem.  I’ve seen several Muslims on Twitter combating antisemitism or grumbling about the bigotry of their friends or relatives (the same is true of quite a few non-Muslim Harry’s Place readers, a reminder that this really isn’t a problem which is confined to Muslims.)  The MCB has condemned antisemitism in response to the conflict in Gaza, and Tell MAMA continues to work closely with the CST, tackling rather than ignoring the tensions caused by Operation Protective Edge.

So to sum up – this is a distorted view from Liddle, one I’ve seen mirrored by those who seek to portray all Zionists as extreme, indifferent to Palestinians’ suffering, or anti-Muslim.

Douglas Murray’s ‘Are “integrated Muslims’ integrated?’ also touches on Muslim antisemitism, although his main preoccupation is Muslim support for Palestinians. Again, there are some things I can agree with here.  He opens by pointing out that Muslims are disproportionately represented in pro-Palestinian demonstrations.  Based just on the Cambridge demonstration, for example, this is true, although (in so far as one can guess who is Muslim from appearance) they were still a decided minority. He goes on:

These otherwise “integrated” people hate Israel and Jews because they have been taught to. A whole generation — perhaps several — has been taught to hate. That is a lot of hate, but it needs to be tackled.

The best place to start might be by tackling the lies and defamations that are allowed to go on underneath everyone’s noses, such as the frivolous — and false — accusations of Israeli “genocide,” “war-crimes” and the like. The problem is worse than anyone had thought.

I completely agree with his point about ‘genocide’, but I don’t accept that the Muslims on such demonstrations all hate Jews.  (Though some clearly do, and that shouldn’t be glossed over, as do some non-Muslim pro-Palestinians.)  Murray continues to elide support for Palestinians with antisemitism.

It seems to have been the assumption of many involved in trying to prevent anti-Semitism in Europe that the problem of anti-Israel and anti-Semitic activism could be put down, among the Muslim communities, to a minority of radicalized people called “Islamists.” … But now, since Gaza, a terrible realization has begun to strike: that analysts may have been focussing on the tip of the iceberg while ignoring the vast immensities beneath.

It is true that one might be both Muslim and antisemitic but not a Hizb supporter.  But Murray picks on a Muslim who (at least on the evidence provided here) has given no indication that he is an antisemite.

The British boy band, One Direction, for instance, has five members. One of its members, Zayn Malik, happens to be a Muslim. When the Gaza war began, it was Zayn Malik alone, out of all five members of One Direction, who started tweeting hashtags to do with “FreePalestine.” They caused a media storm. The singers in One Direction are not generally known for their interest in geo-strategic issues. Is it coincidence that it was Malik and not any of his bandmates who felt compelled to weigh in on the side of the government in Gaza, led by the terrorist group Hamas, rather than on the side of the open, democratic nation-state of Israel?

Plenty of people tweeted #freepalestine and there seems no reason to assume that Zayn is any more of a Hamas fan than say Rihanna.  Without evidence to the contrary, I assume that his tweet was motivated by sympathy for people in Gaza, and that his Muslim identity may have played some part in his interest.  It’s particularly concerning that Murray continues:

Certainly, some of them are [Islamists], but many are simply enraged Muslims. Some – just like Zayn Malik of One Direction – are people whom you would ordinarily have described as models of integration. Yet if it comes to any action of Israel’s, they behave in a way no ordinary British person does or would.

Malik doesn’t seem particularly ‘enraged’ – unlike those who have targeted him with death threats – nor does his behaviour seem so alien to the ‘ordinary British person’ (a phrase which rather suggests a disconnect between being British and being Muslim).  Plenty of non-Muslims are concerned about Gaza, and reflexively somewhat pro-Palestinian. And plenty of non-Muslim celebs articulate their feelings about I/P far more intemperately than Malik – Roger Waters is just one very obvious example.

Finally, it’s worth pointing out that Murray is completely wrong when he sneers:

The singers in One Direction are not generally known for their interest in geo-strategic issues.

Harry Styles, the best known member of the band, has a reputation for being a supporter of Israel, and caused controversy when he brandished a hammer with an Israeli flag at a recent concert. 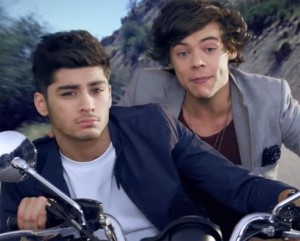 During one of his recent concerts, Harry asked his fans to hand him a huge inflatable hammer, which had an Israeli flag on it. The singer simply sung his song by waving that hammer and did not shout any slogans for pro-Israel. But his actions were enough to cause the furor.

The whole scenario started when Ben Wintson, producer and director of number of One Direction songs, tweeted a link to an article on Huffington Post titled, “Why I’m Pro-Israeli AND Pro-Palestinian.” The article was reportedly noticed by Harry and he followed the writer of the article Lliana Bird on Twitter. This prompted many of his fans to think that Harry is pro-Israel.

This isn’t just a recent interest – he used the hashtag #prayforIsrael back in 2012. Styles also has a strong interest in Judaism.  He fasted on Yom Kippur last year, and was reported to be learning Hebrew at one point.  According to the Jewish Chronicle:

He also regularly tweets in Yiddish; wore a silver Star of David around his neck at the Teen Choice Awards this year; and is a regular at pan-asian kosher restaurant Met Su Yan in Golders Green.

In the light of his clear interest in the topic, his deliberate decision last month to take the Israel-themed hammer from a fan and use it as a prop could be seen as a more forceful, more striking, comment on the conflict than Malik’s rather formulaic tweet.

Returning to Liddle and Murray – for those who are Muslims and/or bien pensant leftists, a tendency to downplay problems such as antisemitism is in part a defence mechanism against anti-Muslim bigotry.  It’s important to engage unflinchingly with all illiberalism (and, although he’s made some very controversial statements in the past, Murray can do this well). However exaggeration of Muslim antisemitism isn’t the right response, and can itself feed illiberalism of a different kind.