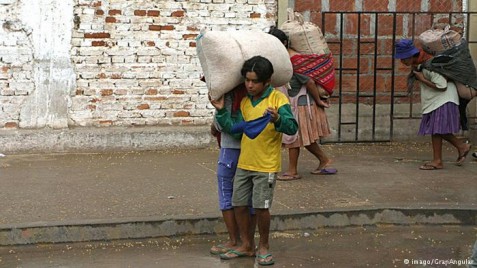 One of the many things I admire about the socialist I was named after was his early and sustained opposition to the scourge of child labor. In 1904, beginning his second campaign for President of the United States, Eugene V. Debs said:

Woman must be given her true place in society by the working class.

Child labor must be abolished by the working class.

It wasn’t until more than 30 years later that federal law finally put restrictions on child labor, and outlawed it entirely for children under 12.

So even though I’m not a fan of Bolivian President Evo Morales (among many other reasons is his visceral hostility to Israel), I was shocked to learn that his nominally socialist government has approved legislation that allows children as young as 10 to work.

The legal working age in Bolivia has long been 14, and older teens are in theory restricted to jobs that do not damage their health and wellbeing. But despite those prohibitions, child labour is rife.

Whether they are shining shoes on a street corner or collecting fares on a bus, young workers are a highly visible part of society. Extreme poverty has decreased in Bolivia in recent years but remains a hard reality for the nearly 1 million people who survive on less than 75 pence a day.
…..
Bolivia is party to the International Labour Organisation’s minimum age convention, which permits a minimum working age of 14. In January, advocacy groups including Human Rights Watch addressed a letter to Morales objecting to the proposed decrease.

Somewhere, Newt Gingrich may be smiling.

The government and supporters of the law justify this action by insisting that the new law will help protect child workers.

Sixteen-year old Junior Pacosillo, who has worked since he was nine, disagreed. Instead of making exceptions to the minimum age, he said, the government should create employment for adults as part of its anti-poverty programmes so that they can support their children.

“It would be better if with all the money they are distributing the government had created more jobs and businesses, things that could help our parents,” he said.

Like Eugene Debs, Junior Pacosillo understands the essential wrongness of child labor in a way that the Bolivian “socialists” clearly do not.

Aidan McQuade, director of Anti-Slavery International, writes at The Guardian:

There are some protections included in the law: children between 10 and 12 must be supervised by a parent while they work, under-12s are not permitted to undertake third-party employment, and children must still attend school.

But with about 850,000 child labourers in Bolivia and only 78 inspectors, it will be difficult to uphold these protections. And how will children, exhausted after a day’s work, be able to engage in learning? They risk missing out on a proper education, eroding their chances for better paid employment in future. Rather than breaking the cycle of poverty and illiteracy, the new law appears to entrench it.

Without a proscription on child labour, the limits on what is permissible are likely to become blurred and then extended. It is not fanciful to worry that this law could lead to a greater regional acceptance of child labour, making it harder to eradicate.

It’s hard to see the new Bolivian law as anything other than a step backward for social justice and human progress– ironically taken by a government admired by so much of the “anti-imperialist” Left.

A better approach would be that adopted by Brazil, which provides stipends to poor families on condition that their children attend school and are vaccinated.