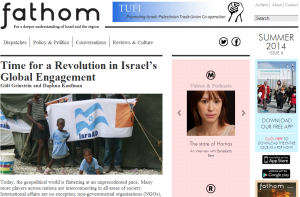 Fathom 6 is online. Our writers explore five questions concerning the future of Israel.

First, what will sustain Israel as a resilient democracy in the face of global social change?

Gidi Grinstein and Daphna Kaufman of the influential Reut Institute argue that Israel needs a revolution in how it thinks about foreign relations. Einat Wilf the former MK and now a roving global ambassador, begins a regular column about her life at ‘the front’. Jonathan Cummings reviews Diana Pinto’s book Israel has Moved, and Dr Simcha Getahune, Director of ELEM – Youth in Distress talks about her work.

Second, how can Israel’s security be maintained in a turbulent region?

Jonathan Spyer maps the state of the conflict in Syria today and the character of the forces waging it, while Ben Cohen interviews former Pentagon official Michael Doran about American foreign policy today.

Gary Kent affectionately traces the journey of Iraqi Kurdistan from dictatorship to democracy, and the Iranian human rights activist Ladan Boroumand reflects on the inspirational legacy of Václav Havel.

Third, where is the fresh thinking about peace with the Palestinians after the suspension of the current round of talks?

Benedetta Berti, a fellow at the Institute for National Security Studies (INSS) at Tel Aviv University talks to us about the state of Hamas, while Ofer Zalzberg, draws on a major report produced by the International Crisis Group to set out why it is vital to include religious Zionism in the quest for peace, and how its support or at least its acquiescence might be secured.

David Newman, an expert on the question of demarcating the future Israeli-Palestinian border, offers a thought-provoking discussion of the border question and fresh-thinking about ‘exclaves’ and ‘cross-citizenship.’

Fathom editor Alan Johnson interviews Ari Shavit, author ofMy Promised Land: The Triumph and the Tragedy of Israel while the book is reviewed by Hannah Weisfeld, Director of Yachad. Ahron Bregman’s Cursed Victory: A History of Israel and the Occupied Territories, based on ‘top secret’ sources, has created headlines around the world. The author spoke to Fathom about his life and his book.

Fourth, what are the roots and what is the current state of Israel’s cultural renaissance?

Our film reviewer Yair Raveh explores representations of Ashkenazi and Sephardic Jews in Israeli cinema, from the past of Sallah to the present of Orange People and The Dove Flyer.

Fifth, why has the global Left lost its way so badly on the question of Israel?

Gabriel Brahm reviews Deconstructing Zionism: A Critique of Political Metaphysics, as ‘a kind of theoretical quenelle proffered in Israel’s direction’ from the heights of academia. The academy, of course, is a contested space. Philip Mendes, an Associate Professor at Monash University, talked to Fathom about his important new book Jews and the Left: The Rise and Fall of a Political Alliance, published by Palgrave Macmillan