An anti-Israel group called American Muslims for Palestine recently purchased advertising on the sides of buses in Washington, DC: 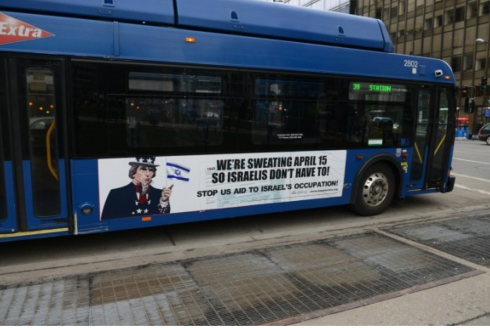 April 15 being the deadline for paying income taxes, it’s a stupid and offensive attack on US aid to Israel– none of which goes to support the occupation of the West Bank or the building of settlements there. And as a former Israeli taxpayer, I can affirm that Israelis do not get a free ride on taxes.

Surely this ad deserved some sort of response. How about ads featuring Israeli-developed drugs and medical devices that are helping Americans live healthier lives? Or featuring Israeli Arabs who refuse to play the role of eternal victim assigned to them by groups like American Muslims for Palestine?

Sorry. Not divisive and hateful enough for Pamela Geller, who responded by placing this ad on DC buses: 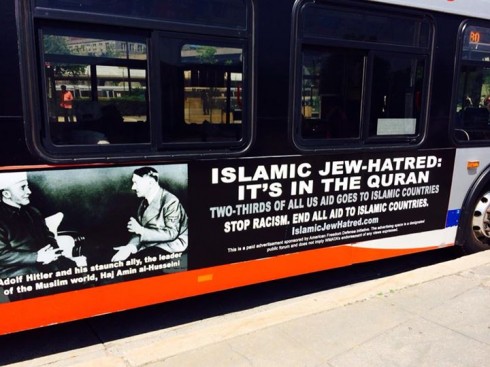 Haj Amin al-Husseini, the Mufti of Jerusalem, indeed collaborated with the Nazis during World War II and fully supported the mass extermination of the Jews. But he was no more “leader of the Muslim world” than the religious leaders in Algiers who delivered sermons warning Muslims against participation in schemes to strip Jews of their property, or the rector of the Great Mosque of Paris, who helped save 100 Jews.

As for cutting off aid to Islamic countries: unlike George Galloway, the US Agency for International Development does not simply hand wads of cash foreign leaders with no accountability. Its programs in countries like Pakistan and Afghanistan focus on improving and expanding health services and educational opportunities. In Afghanistan, for example, this aid has helped increase school enrollment from 900,000 boys and nearly no girls under Taliban rule, to eight million children today, more than a third of whom are girls. This kind of assistance weakens, rather than strengthens, Islamic extremism.

And yes, there is hateful stuff about Jews in the Quran (see also Matthew 27:25). But at least in the US, this doesn’t prevent Muslims and Jews from sharing each other’s facilities and participating in each other’s barbecue contests.

I can only smile when I think of how angry and/or befuddled such things must make both Geller and some members of American Muslims for Palestine.