In his 1st edition of his Israeli Apartheid: A Beginner’s Guide, Ben White included an essay by convicted Holocaust denier Roger Garaudy essay on Zionism in his ‘select bibliography’ (p.162). 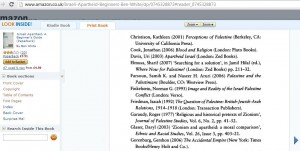 White infamously declared “I do not consider myself an anti-Semite, yet I can also understand why some are.”

Now it looks that even Amnesty are being rather more cautious with Ben White.

White is launching a new edition of his book on March 21st at Amnesty’s London address. The new version may or may not have edited out the recommendation of a Holocaust denier’s writings – I am not spending £10 to check this. Maybe the event’s host David Hearst could leave a comment here and let us know either way.

The event info used to read:

Join us for the launch of a new edition of Ben White’s crucial introduction to the Israeli-Palestinian politics, ‘Israeli Apartheid: A Beginner’s Guide’. […] the event will throw a spotlight on the Israeli authorities‘ racist and discriminatory policies and actions.

Pluto Press is launching a new edition of Ben White’s analysis of Israeli-Palestinian politics, ‘Israeli Apartheid: A Beginner’s Guide’. […] the event will throw a spotlight on what some believe to be racist and discriminatory policies and actions by the Israeli authorities.

Of course it is still rather problematic for Amnesty to be allowing Ben White to set up shop in their building, but at least it seems they are starting to hedge their bets somewhat, with regards to his writing.

Amnesty are perhaps realising that White impinges upon their own credibility, so now might be the time to encourage them to go one step further, and distance themselves from him altogether.