This Sunday the East London Mosque’s London Muslim Centre is due to host an event organised by a youth group. 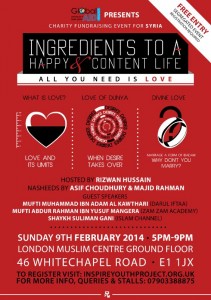 One of the scheduled speakers is Muhammad ibn Adam al-Kawthari. Readers may recall his hideous views on punishment for adultery and marital rape.

To get another measure of the man, simply read this unbelievably cruel and vicious answer (from his website) to a question about what should be done for Iranians fleeing lethal persecution. Here it is:

We have clients from Iran. One client came in last week admitting he committed adultery in Iran and when his mistress’s husband found out and threatened to kill him he fled the country to this country. The basis of his claim is that, should he be sent to Iran he will be stoned to death according to the Law. It was almost my job to help draft this client’s witness statement but luckily someone else in the firm did it. However I could easily get a client like this in the future. Would it be permissible to help this man prepare his witness statement and even represent him at court?

Remember that in accordance to this country’s law this is potentially a perfectly valid claim for Asylum but I am concerned that I am helping a man flee from a correct Shari’ah punishment.

Q.2. Many other Iranians come and claim asylum on the ground that they converted to Christianity and will be put to death should they be deported back to Iran. Sometimes it seems obvious that these guys are converting in order to get into the country (nauzubillah). I’m worried that if I help these guys and they are successful then it will help create a precedent to follow for other desperate Muslim Iranians.

Would it be permissible to aid such asylum seekers if (a) they are genuinely Christian and are fleeing form the Hadd Punishment; and (b) they are Muslims who we SUSPECT (from his very poor knowledge on Christianity and vagueness in answering qs) are lying and making up a story in order to get in.

3. If these are Muslims who are saying they are Christians in order to get in the country (but really do not believe in it) are they committing Kufr?

ANSWER
In the name of Allah, Most Compassionate, Most Merciful,

There are three aspects to your question:

a) To help an individual flee Hadd punishment enforced by committing adultery, and assisting him in getting an asylum in another country,

b) Helping one in fleeing from a Hadd punishment incurred because of apostasy (Ridda),

c) Assisting those who convert to Christianity merely to receive asylum and a British passport, but they do not convert in reality.

As far as the first situation is concerned:

The Fuqaha are unanimous on the fact that, if the case of an offender (in offences which are the right of Allah, such as apostasy, adultery, etc…) is brought to the courts, the punishment will not be obviated, even if the guilty person repents.

Imam Malik (Allah have Mercy on him) relates in his Muwatta’ from Zubair ibn al-Awwam (Allah be pleased with him) that he said:

“If the case of the offender is taken before the Judge, then Allah’s curse is on the one who intercedes and the interceded.” (2/398)

Also in Muwatta’, Sunan of Ibn Majah and others, it has been mentioned:

“The Companion Safwan ibn Ummayah (Allah be pleased with him) took a thief to the Messenger of Allah (Allah bless him & give him peace) and the order of amputating his hand was given. Safwan said: “I did not intend this O Prophet of Allah; he can keep what he stole.” The Messenger of Allah (Allah bless him and give him peace) said: “You should have forgiven him before you brought him to me.” (Muwatta’ of Imam Malik, 2/398)

It is thus clear from the above that it is impermissible (haram) and sinful for an individual to flee from the Hadd punishment that he deserves. (Radd al-Muhtar of Ibn Abidin, 3/154)

As such, assisting one in evading the punishment will also be unlawful, as Allah Most High says:

“Do not help one another in sin and transgression.” (Surah al-Ma’idah, v: 2)

The same ruling will apply in the second situation (apostasy, see above), as it is not permissible for a Muslim to leave Islam. Therefore, assisting in evading the legal consequences of apostasy will not be lawful.

As far as the third situation is concerned, where an individual claims to be a Christian in order to enter a Western country, I would like to say the following:

Islam is a great gift from the Almighty Creator. It is far more valuable than this world and whatever is contained therein. If one uttered disbelief (kufr), then he/she will come out of the fold of Islam. Only the situation of true and dire compulsion is exempted, as Allah Most High says:

“Except under compulsion and his heart remaining firm in faith.” (Surah al-Nahl, V: 106)

It is stated in al-Fatawa al-Hindiyya:

“If an individual uttered disbelief with his own will (i.e. without being forced and compelled) and his heart was content with Iman, he will still be regarded as a disbeliever (Kafir).” (al-Fatawa al-Hindiyya, 2.309)

This is the reason why according to the majority of the Ash’ari and Maturidi theologians of the Sunni way, pronouncing the Shahadah verbally, is normally a condition for a person to be considered a believer, as discussed in the major works of Islamic beliefs (aqida), such as Imam Taftazani’s Sharh al-Aqa’id al-Nasafiyya and its numerous super commentaries (Hawashi).

How can a Muslim even consider renouncing and leaving his religion and way of life (Deen) in return for worthless and fleeting worldly gains! It has been mentioned in al-Fatawa al-Hindiyya:

“If a Christian converted to Islam and thereafter his father passed away. If he said: If only I had accepted Islam after his death, in order to inherit from his father’s wealth, he will be committing disbelief (kufr).” (al-Fatawa al-Hindiyya, 2/286)

It is thus clear from the above that, to leave your religion in order to get into a country is an extremely offensive and outrageous act and considered disbelief (kufr). To assist and aid such people will also be unacceptable, impermissible, and highly sinful.

Over its last seven financial years the East London Mosque has received more than £3 million in public sector funding.

See Stand for Peace’s briefing on other speakers at this conference.