The French government has written to local authorities across France, asking them to ban Dieudonné’s shows, on the grounds of public order. At one such show, Dieudonne gave an award to Holocaust denier Robert Faurisson.

According to BBC Newsnight (from 38:00), this was principally a free speech issue. Jeremy Paxman introduced a report by saying:

“Now a French comedian has managed to short-circuit his country’s professed commitment to free speech. President Francois Holland, with support from both Right and Left, today encouraged local authorities to ban performances by Dieudonné M’bala-M’bala – usually known just as “Dieudonné”. It’s being done on grounds of public order because his alleged antisemitism has tested to destruction Voltaire’s supposed belief that ‘I disapprove of what you say, but I will defend to the death your right to say it.’ Before we talk about the limits of free speech, Hugh Schofield reports from Paris…”

What follows is a “balanced” video package, in which Newsnight can’t make up its mind if the quenelle is an antisemitic or an “anti-establishment” gesture, and concludes by saying that the French won’t be able to keep Dieudonné quiet in the internet age.

After the report is shown, we then move to an interview between Paxman and Alain Soral (42:45). Soral was a member of France’s Far Right Front Nationale (FN) until 2009. He soon became notorious for campaigning alongside Dieudonné in his “Liste Anti-Sioniste” (LAS) for the 2009 European elections. At one LAS press conference, the party claimed Zionists were behind every divorce.

Soral is not just a friend of Dieudonné, but his Far Right political ally. He also has extreme views on Jews himself, as seen in the following video, where he complains about the “biggest global religion” of the Shoah, with the “sacred” gas chamber as the religion’s “cross”, or central theme.

Elsewhere, Soral tells a Holocaust-denying French website that France threatens prison for those who refuse to exchange “serious history” for “obligatory memory”, saying that he can’t go into further details because otherwise he too would “risk prison”, and saying that France’s anti-denial Gaysott law “means 6-3 = 6.”

There is plenty more such Soral filth available online. On the Égalité et Réconciliation website that Soral and Dieudonné run, Soral has posted the following image: 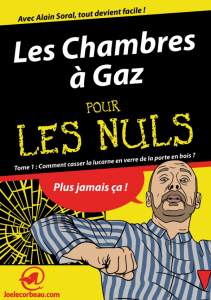 Translation: The Idiot’s Guide to Gas Chambers. How to break the window glass in the wooden door? With Alain Soral, everything becomes easy!

Yet Soral is introduced by Paxman as “the French writer and film-maker Alain Soral.”

This phrase is repeated as a caption on-screen. 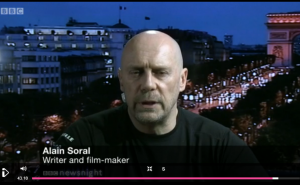 Neither Paxman nor Newsnight reveal the fascist and antisemitic background of Soral – he is simply a “close friend” of Dieudonné who helped him “popularise the quenelle.” This is a real shame, considering the BBC’s trusted role as a credible and authoritative public broadcaster.

Paxman does not challenge Soral for suggesting “a deep link between the system of domination that Mr. Dieudonné is challenging, and the organised Jewish community.” Neither does Paxman challenge Soral’s conspiracy theory about a “very powerful Zionist lobby in France”. Paxman also lets Soral’s claim go unchallenged, that the “annual CRIF dinner” (Jewish community dinner) proves the French government is “entirely under the influence of the Zionist lobby.

What exactly went on during the editing process at BBC Newsnight that allowed a Far Right Holocaust denier to be presented credibly as a “writer and film-maker”, and allowed to promote his own antisemitic views unchallenged?