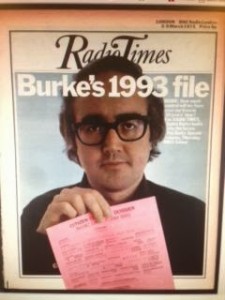 A science broadcasting legend predicts the future, after getting it mostly right 40 years ago, and has some choice words on the NSA ‘scandal’.

James Burke is a British broadcasting legend, one who any Brit over 45 years old would recognise as the face of technological progress.

Most familiar as the chief presenter of the long-running BBC science series ‘Tomorrow’s World‘, he also anchored the Moon landing coverage and has written many influential books. The Washington Post has called him “one of the most intriguing minds in the Western world.”

He may be familiar to Americans for his hit PBS series charting how technological progress happens, ‘Connections’, and his writing for Scientific American and Time.

Writing in 1973 for BBC magazine Radio Times he predicted life today and marking that 40th anniversary the BBC has looked back to see how his predictions stack up: they mostly do. He predicted the mass take-up of computers, in-vitro fertilisation and cheap air travel.He got right that the British people would resist identity cards. He got wrong that there would be 300,000 computer terminals by 2000 – there were 134 million.

Speaking to the BBC’s Eddie Mair, Burke was asked about this attitude to privacy in the light of the current panic about government and privacy.

Burke says that issues like transparency and accountability are new, they have come forward because of the Internet, the ‘information age’. That the general public now has access to more information, and is demanding it – this is “healthy”. But matters of privacy are contextual:

When street numbers came out in the Austro-Hungarian empire in the 1820s there were riots, because nobody wanted others to know what your street number was. Times change. When you tick a box when you buy something online that allows them to put you in their big data pile and find out what you’d really like next time.

Walmart does 300 million transactions an hour and they use that information, for example, when there is a big hurricane predicted they’ll put torches on the shelves exactly where you want to buy them. And pop-tarts because, believe it or not, that’s what people buy when there’s going to be a hurricane.

Asked if he’s content with this situation (which he had predicted) Burke reflects that when he visited the Soviet Union he was told to be careful of what he said, ‘because everyone is listening’. Says Burke:

Of course they’re not listening. If they had to listen to everything we said in hotel rooms in the USSR in those days they’d be up all day and night.

So called snooping is them looking for metadata, not what you say. Not what you said to Charlie but the fact you talked to Charlie. If Charlie’s unimportant and you’re unimportant the thing they’re happiest to do is dump it because the pile is unmanageably big now.

So called Big Data, the electronic exhaust we leave behind, is unbelievably large and growing at extrapolated rates. Nobody is going to ask me what I said to somebody on the phone yesterday afternoon, they’re not interested. The algorithm will say ‘I see he’s talking to so-and-so and it’s not relevant to us’, and that’s as far as it will go. There’s no other way you can run the system anywhere.

So you’re unperturbed by the NSA and the Edward Snowden revelations and all that?

We’ve been doing that since we left the caves. Anybody who thinks that governments have not been taking what they can about public behaviour, they haven’t understood the political process.

Of course everyone does it, of course they’ve always done it. Seems to me the press has jumped on the idea that people are snooping without recognising that the amounts of data are so gigantically enormous that there is no way that the NSA cares a rat’s ass about me or you.

We’re in a transition period. I don’t think it’ll be that long before we’ll be able to throw out our own search algorithms to, say, find out if anybody is looking at me!

Speaking about the future, Burke cites one development which will fundamentally change the world: nano-factories. (Video about this after the jump.)

Let’s say that 2040 sees the start of worldwide wi-fi distribution of software kits to make a nano-fabricator. Sits in the back garden, spare room, somewhere. Uses dirt, air and water and a bit of cheap, carbon-rich acetylene gas. Manipulates atoms and molecules to produce anything you want, virtually free. Each fabber can make copies of itself, so: 1, 2, 4, 8, 16 etc: one each for nine billion of us, say, by 2042.

Sixty years later, we’ll have adapted to the new abundance and are living in small, no-pollution, autonomous communities, anywhere. Energy from spray-on photovoltaics makes any object (like a house) its own power source. So, here you are in your fabber-fabricated dwelling, filled with Mona Lisas if that’s your wish, with holographic reality transforming any room into anywhere (like: beach, sun, wind ruffling hair). So nobody travels any more. Want to see a pal, have dinner with your mother, join a discussion group? No problem: they’ll be there with you as 3D holograms, and you won’t know Stork from butter, unless you try to make physical contact (I’m avoiding sex and reproduction because that might have to be wild speculation).

The entire global environment will also be covered with quintillions of dust-sized nano-computers called motes. So your life will be constantly curated by an intelligent network of ubiquitous cyber-servants. The “motes” will know you need more food, or that it’s a bit chilly today, or that you’re supposed to call Charlie. And they’ll take the relevant action. Your shirt (motes in the fabric) will call Charlie. Either his avatar will appear, or you’ll hear his voice. Not sound waves, but brainwaves. Brain-to-brain communication (it happened for the first time in summer 2013).

No travel means no need for infrastructure, such as high-speed trains (unnecessary by mid-century, along with superhighways and airports). No need for anything that Government does, because, in our millennial culture of scarcity, Government was primarily there to tax, spend, and re-distribute the wealth. In 2103, with no scarcity, what need for Government? And with abundance, everybody has everything, so what need for criminals?