I’m a little late with this, but I want to record that June 8 marked the 80th anniversary of Max Baer’s defeat of Max Schmeling in a heavyweight boxing match at Yankee Stadium in New York. (This was several years before Schmeling’s more famous fights with Joe Louis.)

I was reminded of this by Roger Waters using the Star of David as a symbol of evil. Eighty years ago Baer used it as a symbol of pride and defiance against evil. 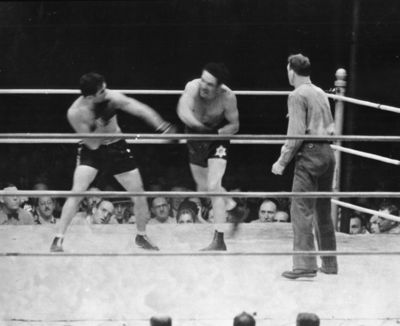 Baer, a Californian, was the 24-year-old son of a Jewish father and was proud of his Jewish heritage. The German Schmeling was a favorite of Adolf Hitler, who had come to power a few months earlier. Before the fight Baer’s aunt Emma Edelstein sewed the Star of David onto her nephew’s boxing trunks.

According to an account of the fight at Boxing.com:

The day before the fight Baer told the press, “I’m going to hit that Dutchman so hard, everyone in Germany will feel it, including Hitler.” Max had trained harder than usual for this fight against the German. His manager, Ancil Hoffman, had been telling him of all the horrors that the Jewish people were undergoing since Hitler had taken power in Germany. It ran the gambit from public beatings, to concentration camps and even murder. The fight was sold as a showdown between the western democracies and Nazi Germany.

In the German’s dressing room, Schmeling appeared calm and confident. He had arrived just weeks before the fight on the North German Liner Bremen. Hitler had warned Schmeling, “When you go to the United States, you’re going to be interviewed by people who are thinking that very bad things are going on in Germany at this moment. And I hope you’ll be able to tell them that the situation isn’t as bleak as they think it is.” Schmeling took Hitler’s advice and called a press conference as soon as his ship arrived in New York. He told the Associated Press that “I have seen no Jews suffer,” adding that “whatever pain they are undergoing they have brought on themselves by circulating anti-Nazi horror stories in New York and elsewhere.” It was an out and out lie and Schmeling knew it. He just wanted to finish off Baer as Hitler demanded and go home. He loved being a national hero. Schmeling could take or leave politics, but the adulation of the German people was like a drug to him.
…..
By the end of the 10th round the judges had the German way ahead on points. Max Baer was a fighter not a boxer. Baer’s corner told him, “You’re behind Max, you have to knock him out to win.” Baer broke into a big smile as his trainer Mike Cantwell pushed the mouthpiece back into his mouth for round 10. Baer came out after Schmeling like a wild man, throwing a series of combinations to the head and body. The two men stalked each other, each looking for an opening. Baer was looking for a knockout while Schmeling was trying to hang onto the decision. Suddenly, Baer caught Schmeling’s face with his big overhand right. Seeing he was hurt, Baer sailed into him and knocked Schmeling to the canvas with another right to the jaw. Baer looked down at him and growled, “That’s for Hitler!” 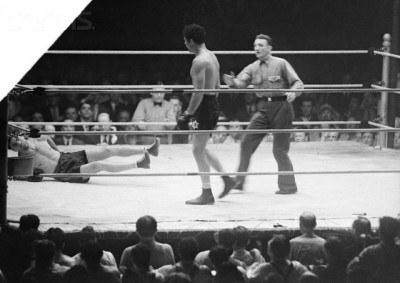 Somehow Schmeling rose on the count of nine, and Baer went in for the finish. Weary and defenseless, the German dropped his gloves and swayed slowly on his heels. Baer could have thrown another right and knocked Schmeling out. Instead he turned pleadingly toward referee Arthur Donovan to stop the fight. Baer didn’t want to kill Schmeling, just embarrass the Nazis. Donovan stepped between the two fighters and stopped the bout by TKO at 1:51 of the 10th round. Max Baer had defeated the German hero. Hitler was not amused. The Nazi myth of racial superiority had been shattered. In Berlin, the Nazi leader threw one of his famous fits, ranting and raving, spittle dripping from his mouth, moaning about the Jews and how he would get even with them. 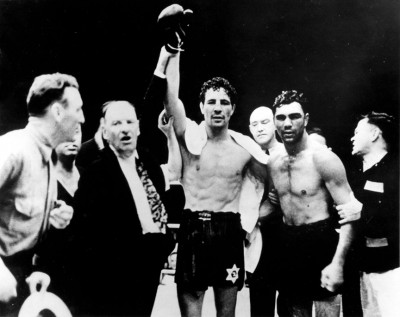 The New York Times reported, “All [German] papers ignored the fact that Schmeling was beaten by a man who in Germany would be classified as a Jew.” It seems that Baer being half-Jewish, a Mischlinge in German, was more than enough for the Nazis in Berlin, but not for the sportswriters in New York. A few months later they quietly banned all mention of Baer in the German media. Baer often said in later years that on the night he knocked out Schmeling, “Every punch I threw was aimed at Adolph Hitler.”

I would say Baer has posthumously defeated Waters in a first-round knockout.