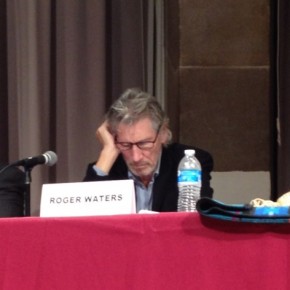 Musician Roger Waters (pictured above listening intently to evidence at last year’s Russell Tribunal on Palestine, which convicted Israel of apartheid, war crimes and genocide) recently began a European tour in Belgium, where one of his props was an inflated pig with a Star of David on the side.

Next to the Star of David, on the wild pig balloon, there was also a sign of oil conglomerate Shell, and a graffiti message stating, “Everything will be okay, just keep consuming,” and “What’s wrong with people?”

“I came to the concert because I really like his music, without any connection to his political stance toward Israel,” says Alon Onfus Asif, an Israeli living in Belgium. “And I had a lot of fun, until I noticed the Star of David, on the inflatable pig. That was the only religious-national symbol which appeared among other symbols for fascism, dictatorships and oppression of people. Waters crossed the line and gave expression to an antisemitic message, beyond all his messages of anti-militancy.”

Imagine the deservedly angry reaction if, instead of the Star of David, the pig had featured the Islamic crescent and star.

And I was saddened to learn that Eric Burdon (former lead singer of the Animals, one of the greatest bands in rock and roll history) canceled a concert in Israel because of threatening emails.

Burdon, whose band’s decades-spinning career including hits such as “The House of the Rising Sun,” “We Gotta Get out of This Place,” “It’s My Life,” and “Don’t Let Me Be Misunderstood,” was to have performed alongside Israeli legends Tislam at the Zappa Shuni Amphitheater in Binyamina. Tickets were already on sale.

Days ago, Burdon met up with members of Tislam in Vienna, and told them he was under pressure from anti-Israel activists to cancel the show. At that time, though, he seemed set on going ahead with the concert, telling the Israeli musicians, “Everyone needs music and there’s no connection to current politics. Everyone has the right to be entertained.”

But his manager later wrote to Tislam to state that the show was off. “We are under increasing pressure, including many threatening emails that we are receiving on a daily basis. I wouldn’t want to put Eric in any danger,” his manager wrote, in comments released by Tislam on Tuesday.

BDSers deny responsibility for the threats.

We do not know if they are made up by media hostile to the BDS strategy, or by artists and/or their agents, or if they are inflated reports of remarks made by individuals who do not represent the movement.

The possibility that there were actual, non-inflated threats is thereby dismissed.