So Paolo Di Canio claims to be a fascist, not a racist.

He performed the fascist salute in front of the irriducibili Ultra Lazio fans on several occasions, including in a Series A clash with Livorno on 11th December.

Here is footage of chants in the match from Lazio fans, chanting at the left-leaning Communist striker from Livorno, Cristiano Lucarelli:

Di Canio then comes over and performs a fascist salute:

Here is a comment from a Livorno fan who was at the game, via One More Blog:

“I’m a Livorno fan, and I assure you that I’m not a communist. Unfortunately, last night I watched the Livorno-Lazio game, which ended 2-1, where the fans of Lazio and Di Canio have again demonstrated disrespect, and neither the police nor the referee intervened.

Far from being a typical Lazio curva, this seemed to be a national fascist gathering straight out of the times of Hitler, with swastikas and Celtic crosses being waved everywhere, to the rhythm of “Lucarelli: Jew!”. To complete the pretty picture, [we had] Di Canio raising a stiff right arm, in order to greet his supporters. Now I wonder is it possible that no one has yet bothered to try and stop these fans and this player from continuing to insult Italy, and the victims of those tragic events which have made ​​history?

Via Corriere della Serra, here is a picture of Lazio fans at Livorno, whom Di Canio saluted on that day: 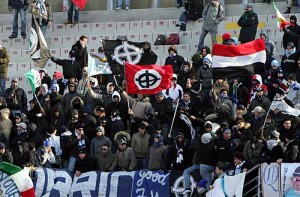 Di Canio identified himself with the irriducibili fans of Lazio, who are obsessed with wishing their opponents death in Auschwitz. Here is their message to AS Roma fans: 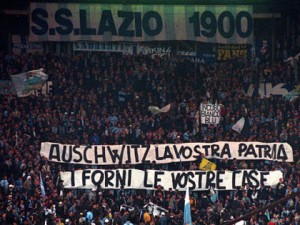 “Auschwitz, your homeland, the ovens your homes.”

The irriducibili notoriously once met with the French player Lilian Thuram, and menacingly assured him he would be welcome in their team – after all, they had a black player in the Lazio youth team. The clip then cuts to irriducibili making monkey chants towards Thuram when he was in a Parma shirt:

This is not all Lazio fans – this is driven by the irriducibili. Whom Di Canio specifically identifies with. 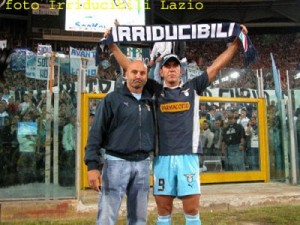 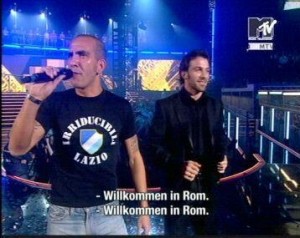 Here is a picture of Di Canio when he was himself a member of the irriducibili: 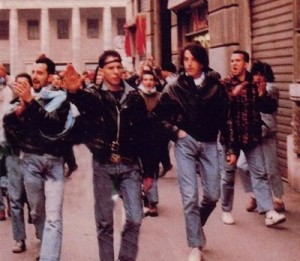 These are images you would associate with the word “Sudetenland”, not “Sunderland.”