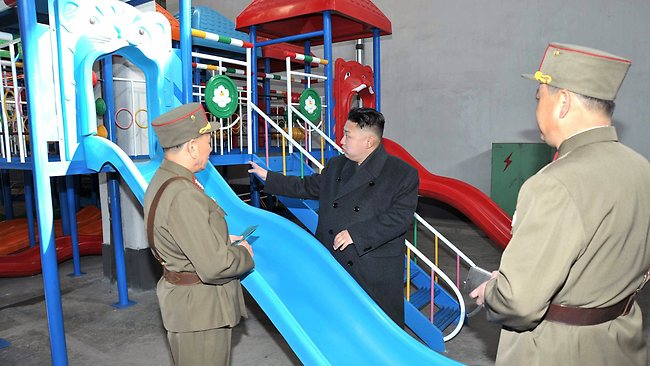 As easy as it may be the laugh at the sight of the Biscuit Snarfler in Chief – the first despotic dictator to be born in the 1980s – instructing his military commanders on the KPA’s amphibious assault techniques, the reality of the infantile spite and viciousness of his Caligulan excesses remains.

New Focus International, a North Korean dissident group has offered a translation of a Government document which, if accurate, would show this in all its unreal ghastliness. Far from recent declarations of war with the Chosun of War in Seoul being derived from mundane concerns as territorial expansion or desire to shore-up personal political control, a driving reason behind it has been to protect the “dignity” of the Kim clan; especially the tens of thousands of statues – and millions of printed images – of his father, grandfather and now himself.

Just as Mick Hartley discussed the reimplementation of the pre-modern Korean society through the caste system of songbun, these statues and images appear to have taken the form of religious ikons and artefacts imbued with the spirit of yangban; or gentlemen scholars of the Confucian Korean ideal. These yangban were entitled to unyielding deference – to the point of lying prostate as they passed – from the lower classes, especially the sangmin or chattel slaves which formed the majority of Koreans.

One way in which the sangmin avoided this time consuming – and, if encountering yangban on muddy streets, filthy – duty was to construct their own enclosed streets. Called pimatgol (lit. “horse avoid”, that is the mounted yangban), these ran alongside the main thoroughfares and often were much longer but still quicker to use.

In 2009, Matt Kelley on his personal blog lamented the demise of the touristy pimatgol in Old Seoul. Forward to 2013, New Focus International discusses the reintroduction of pimatgol to contemporary Pyongyang, including the odd exemption for showing deference if one is pushing a pram with clean wheels; hence, apparently, the common sight of inhabitants using supermarket trolleys in the open street.

At least, there was an aspirational element to the yangban system. Barring the baekjeong/untouchables and children of concubines, sangmin could – in theory, at least – pass the necessary government tests to become yangban; and yangban families which failed to produce another for three generations were stripped of their entitlement. The Juche-manifestation of it and songbun has no such potential for lateral movement.