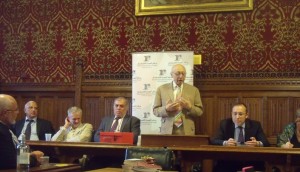 Kaufman calls for boycott of Israel. Andy Slaughter on his left and Jeremy Corbyn (scratching).

I was banned from filming and photographing by the organisers eventhough there were two camera crews in the room, one from Lebanon, and about 10 other people in the audience filming or taking photos.

Then at the end of the event Jonathan Hoffman and I were met by four police officers. Jonathan was taken aside by an officer and told that during the meeting he had said that the MPs were supporting terrorism by allowing terrorist supporters into Parliament. We were then given a police escort out of Parliament.

Jonathan never said anything of the sort. He only spoke during the Q&A when called upon by Gerald Kaufman MP and then only to remind Jeremy Corbyn MP that Israel had frozen settlement building to allow negotiations to resume but that the Palestinians never took Israel up on the offer.

It was Kaufman who raised the issue of terrorism. He said that every week The Jewish Chronicle sends him a complimentary issue and that this week he noticed the headline “Hamas gets a hearing in House of Commons”.

The JC article goes on to describe how Ismail Haniyeh was the guest speaker at PRC’s annual conference in 2009.

Jokingly, Kaufman asked if anyone in the room was from Hamas at which, to loud applause, a young woman raised an arm.

The meeting had started with Kaufman acknowledging the dreadful deprivations suffered by the Palestinian refugees in Lebanon. He said that the refugee camps had no electricity or clean water and that sewage ran down the middle of the streets.

Mohammed Al Hamid, Chair of PRC Board of Trustees, said that the “seven million Palestinian refugees shared their indignities with another 44 million refugees worldwide”. He said refugees wanting to return home was a basic urge and that “we should defend this cause”.

Dr Arafat Shoukri, Director of the Council for European Palestinian Relations, said the Palestinians have no political or civil rights in Lebanon and that they are banned from working in 70 professions there.

He said that the right of return would not lead to the destruction of Israel because the Palestinians having the right is different from them actually exercising it. He thinks the Palestinians should be granted the right and it is up to them whether to exercise it.

He also said Lebanon thinks it is protecting the right of return by keeping the Palestinians in such oppressive conditions.

Dr. Tariq Tahboob, of the Association of Palestinian Doctors in Europe, said that the Palestinians are a very proud people with a 93% literacy rate. He said “Moses, the great prophet of Muslims, Christians and Jews said to Pharaoh ‘let my people go’”. Tahboob then repeated “let my people go”.

Tahboob also said Israel was created on Palestine in 1948 and he called for a two state solution with east Jerusalem as Palestine’s capital and for the right of return to be kept in place.

Andrew Love MP also acknowledged the lack of employment opportunities for Palestinians in Lebanon and how Lebanon imports labour from Syria and Egypt.

Love said that when the Palestinian refugees arrived in Lebanon only the Christian Palestinians were granted Lebanese citizenship by the Phalange government. Now, he said, if a Lebanese woman has a baby with a Palestinian man she will hide his name so the baby will become Lebanese.

Quite unbelievably, despite the obvious suffering of the Palestinians in Lebanon Gerald Kaufman MP and Jeremy Corbyn MP went on to call for a boycott of Israel.

Andy Slaughter MP, Labour’s shadow justice minister, said that the issue of the right of return had been sidelined as there have been so many injustices and abuses  and that the injustices since 1948 are not in the past but in the present.

During the Q&A I was allowed to ask the panelists whether they felt ashamed that, by contributing to this false hope of “returning” to Israel, they have helped to sentence the Palestinians to lives of hell in Lebanon. I didn’t get a constructive response.

And after that Jonathan and I had our appointment with the police.

habibi adds: Hamas service bureau Interpal employee and Palestinian Return Centre (PRC) trustee Majdi Aqil should have raised his own hand when the “anyone from Hamas?” question was asked. Aqil is from Hamas.
Here he is at the event. Oh, the laughs with Labour! 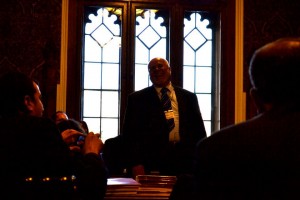 Almost as good as honouring Jenny Tonge with his PRC fellows! (Aqil is on the left.) 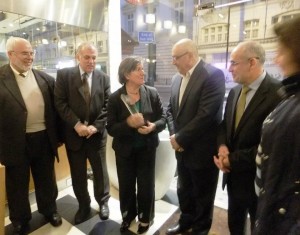 Shoukri as well does what he can for Hamas. Here he is (at the podium) with the Great Man in Gaza. In addition to Clare Short and Jenny Tonge, VIPs on this pilgrimage to Hamas included the horrific Egyptian haters Safwat Hijazi (who has been banned from the UK) and Salah Sultan. 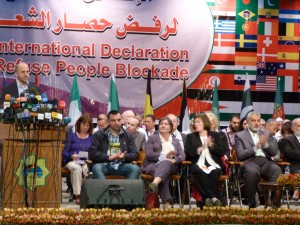 Kaufman likes a laugh with Hamas too. 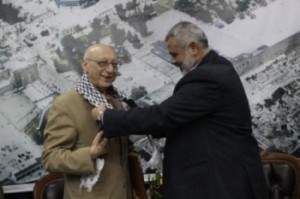 As for Tariq Tahboob, he is also part of of the Palestinian Forum in Britain, the group whose vocation is bringing hate preachers to Britain (if they don’t get banned from the country, that is).

As you will see on the event Facebook page, this person who planned to attend certainly got into the spirit of things.