The Palestinian Return Centre (PRC) is a London-based group dedicated to the return of Palestinian refugees to their families’ old homes in Israel.

As such, it is no friend of peace. Everyone who has followed the negotiations over the years knows that this is a deep red line for Israel. Just as it would be for any Muslim countries asked to compensate Jewish families expelled in the past for their losses, or to grant Jews return to their old homes, should any be so bold as to do so.

Nor will Israel be defeated on any battlefield at home any time in the foreseeable future.

In other words, the PRC’s position amounts to a guarantee of decades of frustration, anger and strife.

So it is hardly surprising to learn that the PRC was established in the 1990s by Abu Sitta, a Palestinian exile, to raise opposition to the Oslo peace process. Nor to see that Mr Sitta frequently uses “Israelis are Nazis” rhetoric fit only for racist haters. As for the Geneva Accord, he dismisses it as the work of Mossad.

The PRC remains on message: it is very keen on Hamas. In the picture below, in November 2008 PRC director Majed Al Zeer (left) shares a platform in Damascus with Khaled Mishaal (right), a top Hamas hardliner. The man to Meshaal’s right is former Malaysian leader and notorious anti-Semite Mahathir Mohamad. The man to al Zeer’s left is Ali Akbar Mohtashami-Pur, an Iranian cleric and former diplomat and minister who played a key role in the build-up of Hezbollah. 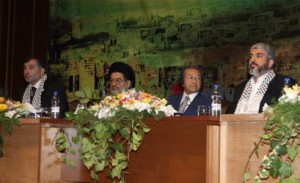 The Damascus conference issued a statement and open letters that are quite pungent. Some examples:

The Congress reaffirms the need to popularize the culture of resistance and its practice as the option of resistance is the best and shortest way to realize the return of the refugees to their homes. It calls for the safeguarding of this option and its fortification on the national, patriotic, Islamic and international fronts.
…
They reaffirm their support for the national, patriotic and liberation stand of Syria and the steadfastness of its people under the leadership of Dr Bashar Al Asad in the face of all forms harassment, threats and aggression the last of which was the abhorrent American attack on Syrian territory.
…
They regard support for the Iraqi resistance and safeguarding of the unity and Arab identity of Iraq an important step toward the restoration of the Palestinian people of their land and rights.
…
The participants in the Arab International Congress for the right of return convinced of the longstanding and current danger of the Zionist role in the plots to dismember Sudan and undermine its national unity, Arab, African and Islamic identity and halt its role as a bridge between the Arab ummah and its strategic and civilizational depth in Africa declare their firm support for the people of Sudan in their struggle against all forms of colonial intervention, dubious internationalization and provocative initiatives.

This was hardly the first time the PRC associated itself so closely with terrorists. In 2007, it hoped to invite Hamas leader Ismail Haniyeh to a conference in Rotterdam. The Dutch authorities refused to issue a visa to Haniyeh. So another Hamas minister was dispatched. He managed to get a visa but was stopped at the airport in Brussels and turned back when the Dutch realised they had made a mistake and alerted the Belgians. For the PRC’s Al Zeer, refusing entry to a member of a proscribed terrorist group was nothing less than a “humiliation of the Palestinian people”.

In 2006, Sweden was more Hamas-friendly than the Netherlands: it allowed another Hamas minister to attend a PRC conference.

Earlier in 2006, a PRC conference in London was addressed by Ismail Haniyeh via an audio link. Other extremists involved in this event included fugitive Hamas commander Muhammed Sawalha and journalist Abdel Bari Atwan, who has said he would “go to Trafalgar Square and dance with delight” if Iran launched a nuclear attack on Israel.

An audio link was also used to allow Ismail Haniyeh to address a PRC-backed conference in Copenhagen in 2008. At that conference, Al Zeer was in fine form:

“the resistance of the Palestinian people has surpassed the bounds of time and it is this resistance which will bring about an honorable future that the mothers of the martyrs, wives of prisoners and heroic children under bombardment all deserve”

Who might like to work with extremists such as Majed al Zeer? Among others, some employees of the Hamas-linked charity Interpal, that’s who. As mentioned earlier, one of the trustees of the PRC is Ghassan Faour. He is also a trustee of Interpal. Another PRC trustee is Majdi Akeel. He works for Interpal.

Amazingly, the Charity Commission’s new report on Interpal does not even mention the charity’s links to the PRC. This is a serious failure when the Commission was so officially alarmed by Interpal’s close relationship with another set of extremists, the charity grouping “Union for Good”, that it demanded Interpal and its trustee Essam Mustafa cut their links with the Union.

By the way, Majdi Akeel’s links to extremists are nothing new. In the Holy Land Foundation case in the USA, his name appeared in two court exhibits.

The first is an entry for him in the address book of top Hamas man Mousa Abu Marzook, which was confiscated when Marzook was arrested in New York in 1995. Marzook has played an important role in fund-raising for Hamas.

The second is the transcript of an intercepted telephone conversation in 1994 between Haitham Maghawri, a former director of the Holy Land Foundation who has been found guilty in absentia of providing material support to Hamas, and Muin Shabib, a Hamas operative mentioned in the BBC Panorama programme about Interpal. The wording of the conversation is somewhat cryptic, but it seems fairly clear that Maghawri was supporting a visa application of Akeel (one of the “brothers”), presumably to a US embassy for a visit to the USA, where Akeel would help Maghawri advance radical causes they shared.

I’d say Mr Akeel has been pretty lucky in his career, overall, as has Mr Faour, and Interpal too. I hope they have written nice thank you letters to all the UK politicians and officials who have helped make this possible.