I have to say that I was slightly taken aback by this strange statement. Iran is “developing nukes”? Now, I expect such sweeping, fact-free, propagandistic claims from the Israeli foreign minister or someone like Newt Gingrich or even Melanie Phillips but et tu Sunny? Shouldn’t we expect more careful language, even on Twitter, from the editor of a blog called “Liberal Conspiracy“?

Sunny better be careful – he might not be “liberal” after all!

In fact, Sunny is further Right than a Zionist, which is pretty bad:

I’m not sure if Sunny has been following my Iran Watch series of blogposts, of which this post is the ninth, so let me remind him of what the facts are; in fact, let me show him how his “views” on Iran are more extreme and to the right of even the US and Israeli defence and intelligence establishments.

Sunny is like a Sunday League footballer, trying to play in the Premiership:

I like Sunny and I admire his wit and passion but, on this ultra-important subject, he is hopeless and dangerously out of his depth.

Wow, getting accused of being of your depth on Iran by Mehdi Hasan of all people, must be pretty humiliating.

Like Harry’s Place, Mehdi is aware of Sunny’s ease at changing his political thought with ease:

Then again, he might change his mind. I vividly remember him arguing, loudly and forcefully, in favour of Obama’s prosecution of the Afghan war back in late 2009 on a trip to Nato’s HQ in Brussels – a pro-war position that he recently and thankfully disowned (again, on Twitter).

And golly, what a presumptuous conclusion. Says Mehdi of Sunny:

I can’t wait for his U-turn on Iran and am happy to continue providing him with the facts he may need in order to execute it. 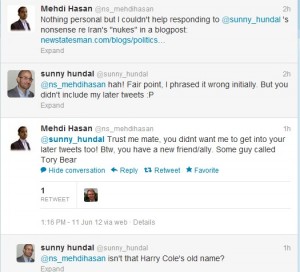 Ooh. Ouch. How awkward, how embarrassing! I almost feel bad for Sunny. He’s just accepted a fisking, and no longer has any arguments against Mehdi Hasan – unlike he had the previous night on Twitter.

I think what’s worst, is that Mehdi didn’t even use his trump card of Ayatollah Khomeini’s fatwa, to disprove Iran’s nuclear weapons programme:

Perhaps Sunny is happy to see his name on the New Statesman website, and thinks that any publicity is good publicity.

But Sunny, you were just dismissed as a lightweight, and trampled upon in public, by someone calling himself your friend. Ouch.

So if you suggest to Sunny from now on, that Iran does have nukes,  expect to see Sunny calling you a right-wing, loony, mad Zionist neo-con nutjob who deserves a massive “LOL :-) #epicfail”.