This Wednesday, hate preacher Yusuf Chambers will be addressing students at the University of York at the invitation of the Islamic Society. Only last year, there was a backlash on campus after the invitation of anti-Semitic, homophobic and misogynist hate preachers. How can such hatred rear its ugly head again? Any student response is troubled by an impermanence to its victories. A long term solution requires the efforts of the University’s ‘civil society’: the faculty, student union, student societies, the welfare office, inter alia, all need to put as much effort into fighting hatred as extremist groups put into spreading it.

Democracy is a very useful tool for Islamist groups. Just as tolerance can give freedom to intolerence; so too can democracy offer ammunition to anti-democratic groups. Harry’s Place readers are well aware of the manner in which anti-Western ideologues work to exploit and manipulate democratic institutions and ideas – employing everything from British libel law to international arrest warrants. The academic Richard Landes describes the perpetrators as ‘demopaths’: people who use democratic language and invoke human rights only when it serves their interests. The most lethal demopaths, Landes notes, use democratic rights to destroy democracy.

However, on campuses this pre-meditated exploitation is not required. Student democracy as a tool for illiberal anti-democratic student groups is something that exploits itself. A religious or political supremacist hold over an Islamic, Politics or Debating Society can be expunged one year, only for a newly-elected student committee to reintroduce Islamist influence the next. At present, we can see this happening at the University of York.

Tzortzis wants to criminalise homosexuality, and equates it with paedophilia and cannibalism. Al-Kawthari has issued a fatwa supporting marital rape should a woman refuse sexual intercourse from her husband.

Unsurprisingly, at the time the student union’s LGBT and Women’s Officer did nothing about either speaker. Although, later that year, the Women’s Officer did get very angry when it was proposed that her position be changed to a ‘gender equality officer’. An interesting set of priorities.

However, other students did speak out, and societies such as Amnesty, StandforPeace and the International Development Group – as well as the local MP Julian Sturdy and journalist Nick Cohen – all condemned the event and criticised the shameful silence of the University and the Student Union.

For the rest of the academic year, extremist speakers were hard to find. The public backlash following al-Kawthari’s visit had been a powerful deterrent. And following a number of anti-Semitic incidents catalogued and reported by StandforPeace, even the extremist York student Palestine Solidarity Campaign branch was not re-ratified the following year.

But student elections happened, new students arrived, old students left and committees changed hands. Due to the short cycle of a student’s university life, as well as too many nights out, the student memory is short. What outraged the campus one year is forgotten the next. And so this Wednesday, hate preacher Yusuf Chambers will be addressing students, once again at the invitation of an Islamic Society under the pernicious grip of Islamist influence.

Yusuf Chambers is a member of the Islamic Education and Research Academy (iERA), which is an organisation that spews hatred of Jews and homosexuals. During an interview with Dr Zakir Naik (banned from Britain for hate preaching), Chambers specifically asks the scholar what the punishment for homosexuality should be:

Chambers accepts his definition and requests that Naik refute suggestions that homosexuality has any natural or genetic origins:

Yusuf Chambers: And but its still seems to be a view which is accepted… So may Allah preserve us from.

Chambers has also stated that Sharia law should be implemented in the United Kingdom and has called for the ‘stoning to death’ of adulterers. In the same interview with Zakir Naik:

Dr Naik: That means if any man or woman who is not married, if they have unlawful sexual intercoolers, the punishment is 100 lashes, flogging them with 100 lashes…

So the punishment for adultery, unlawful sexual intercourse done by married man is Islam, it is stoning to death….

Yusuf Chambers: Well, Dr. Zakir, I feel that those 2 punishments were enough to frighten the most of the individuals from Zina [adultery]. May Allah protect us from that.

Dr. Naik: That’s in Islamic country but the punishment is not there in a non-muslim country.

Dr. Naik: So If it’s put through out the world, InshaAllah, Zina would be removed from the face of the earth.

Yusuf Chambers: May Allah allow us to bring back that punishment to protect all humanity, InshaAllah.

Yusuf Chambers’ friends at the IERA include Abdullah Hakim Quick, who has been condemned by New Zealand’s broadcasting authority for his fiery anti-gay broadcasts claiming that homosexuals are “sick” and “not natural”. Hakim Quick noted: “they said ‘what is the Islamic position [on homosexuality]?’ And I told them. Put my name in the paper. The punishment is death. And I’m not going to change this religion.”

He’s also close to Abdur-Raheem Green, who argues that homosexuality and adultery are “inexcusable, and justly punished with severity.” For this he stipulates death: “a slow and painful death by stoning. It is indicative of just how harmful this crime is to society.”

Below is a screenshot of the IERA ‘advisors’, as posted on their website in 2010. Three of them – Bilal Philips, Hussein Yee, and Zakir Naik – are banned from the United Kingdom. 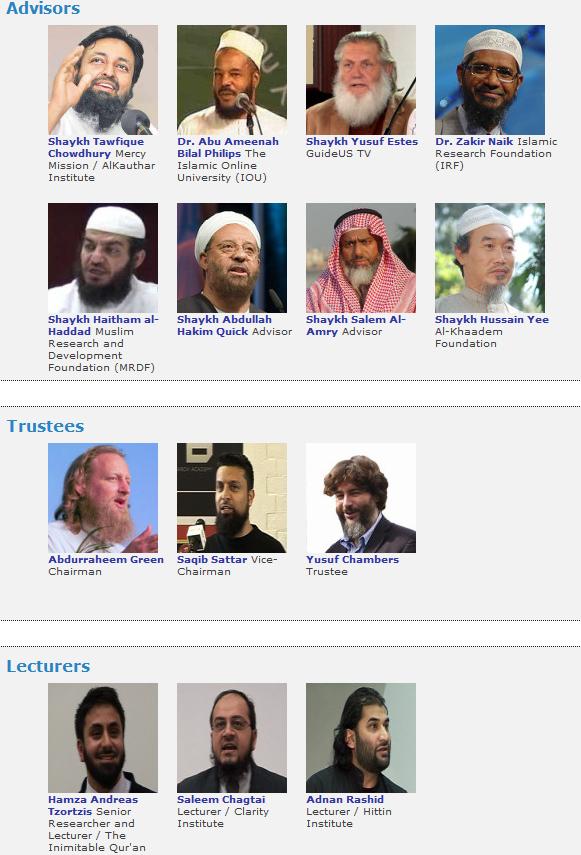 What more evidence does the University of York need to start taking action? Students who speak out against hate preachers one year are gone the next. In order to fight the attacks on democratic values, we require a democratic response.

It is up to the University as a whole to put in place a long term plan for preventing radicalism and hate preachers. It’s time for all of us to stop whitewashing the problem of campus extremism and start fighting the indoctrination of young Muslims and the hatred preached against homosexuals, women and Jews.