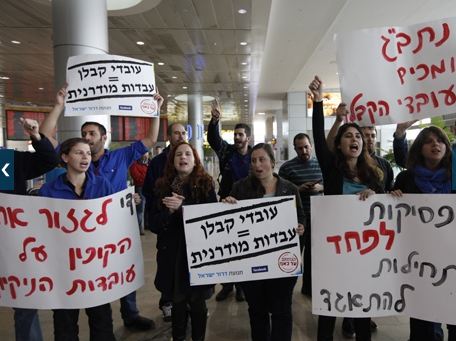 
A reminder that for all the hatred directed against it by elements of “the Left,” Israel has one of the world’s most militant and cutting-edge trade union movements– in which Arabs are a full and equal part.

Israel’s main labor union declared a strike on Wednesday that caused delays at Ben Gurion airport, and affected banks, hsopitals, government offices, trains, the stock exchange, and more, after talks with the government failed to produce an agreement on the status of workers employed through labor contractors.

Finance Minister Yuval Steinitz called the strike unnecessary, saying it could cost the economy billions of shekels if it continues. He accused the Histadrut labor federation of being entrenched in its positions.

Histadrut chairman Ofer Eini said that the length of the strike now depends on the Prime Minister Benjamin Netanayhu and Minister of Industry, Trade and Labor Shalom Simhon.
…..
Meanwhile, the Histadrut and the Coordinating Bureau of Economic Organizations – which represents private employers – have reached an agreement in principle that meets the Histadrut’s main demands with regard to outsourced workers. According to the agreement, which has not yet been signed, outsourced workers who work full time and who have been working for at least one or two years would be hired directly by their employer instead of working for an employment agency as they do now. Workers who continue to work for an employment agency would have their salaries and benefits brought in line with those of regular employees.

The agreement was reached on Tuesday between Eini, the coordinating bureau’s chairman, Shraga Brosh, and its director general, Avi Barak, and the chairman of the Histadrut’s labor unions department, Avi Nissankorn.

While a separate agreement with the private sector does not solve the problem of the rest of Israel’s outsourced workers, it contributes to Eini’s image, and it increased his bargaining power during Tuesday’s negotiating session with Steinitz.

In the session, during which no progress was made, Eini presented a general outline with two main thrusts. Outsourced workers, especially full-time cleaning workers, would be taken on as regular employees by the firms in which they work. The status of other outsourced workers would not change in relation to their employer but they would receive salaries equal to people employed directly by the company.

So while private employers were able to reach an agreement with the Histadrut on contract labor, the Netanyahu government is dragging its heels.

LabourStart is linking to updates.