On August 13th 2011, Harvey Garfield was attacked by RESPECT chair Carole Swords. Swords has now been convicted of “threatening and abusive words or behaviour to cause harassment”.

Carole Swords was participating in a demonstration organised by a group called London BDS, who work alongside the Palestine Solidarity Campaign. 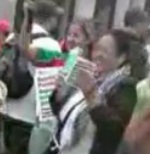 On the “About” page of the Palestine Solidarity Campaign, we read about the PSC’s Boycott Divestment & Sanctions (BDS) campaign against Israel:

After few weeks campaign, we get real momentum,now . This Friday 5th August we will visit 4 Mosques. Join us to become a member of the glorious BDS movement.

West London PSC and London BDS will be at […]

South London PSC and London BDS will be leafleting […]

Clearly the PSC is proud of both London BDS, and its local chapters. You will notice that Holocaust-denier Gill Kaffash is still listed on the main PSC page, as the go-to person for organising the boycott of Israeli dates. (The date boycott, in turn, is driven by Ismail Patel,  and backed by the Shadow Justice Minister).

Here we see how the PSC co-operates with its local PSC chapters in anti-Israel activism, disregarding extreme political views or Holocaust denial.

You can see the PSC promote these London BDS demos throughout 2011, including here, here, here and here.

Indeed, PSC director Sarah Colborne turned up at an Ahava/Tesco demo in July 2011, and started the chant,

Here is footage via Richard Millett. Notice Colborne starting the chanting, with Carole Swords joining in:

This all demonstrates PSC support at a national level, both for London BDS’ campaigning outside Ahava and Tesco in Covent Garden, and for its local PSC activists.

On August 13th 2011, this is the footage that was recorded from the BDS action against Ahava and Tesco:

You will notice Carole Swords very prominently in the video. Two minutes in, you hear Swords joining in a song, to the tune of Hava Nagila, about boycotting Israeli goods. The camera appears to focus on Swords, throughout much of the video.

The national PSC has previously posted stateents from Kingston and Richard PSC, supporting their boycott action against Veolia. We read in April 2011 on the PSC website:

“SLWP’s decision is a victory for the coalition of Palestine solidarity activists, local human rights groups and concerned local residents from the London boroughs of Kingston-upon-Thames, Sutton, Merton and Croydon, who have been campaigning tirelessly for the past year against Veolia’s involvement in the procurement process due to its activities in illegally occupied Palestine. […]  Samrina Mir (Merton PSC) and Ben Jamal (Chair, Richmond & Kingston PSC) said “This is a significant victory for the Bin Veolia campaign […].”

Here is Alexander’s description of his video -posted on the London BDS website:

Saturday 13th August 2011 – With London still in a state of shock, Zionist Federation counter-demonstrators at Ahava and TESCO tried to stir things up in their usual malign way, even though the similarity between the riots in London and the antics of the settlers on the rampage in the West Bank apparently passed them by.

Protesters at TESCO were entertained by a passing Hare Krishna group and by a nearby Zimbabwean demonstration.

Police disperse the few Zionist Federation counter-demonstrators who turned up. 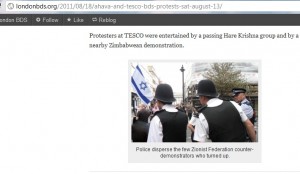 As it turned out, the police needed to make an arrest on August 13th, due to Carole Swords’ assault on Harvey Garfield.

Swords attacked Harvey Garfield as he attempted to defend Israeli products from potential vandalism by protesters.  She received a conditional discharge, and was ordered to pay £250 cost. Swords assaulted Mr Harvey Garfield, knocking his glasses from his face.

The credibility of the Palestine Solidarity Campaign is low, and their ability to combat rather than foster extremism within their ranks, is non-existent.

In other news this week:

Mohammed Abdelkarim was accused of biting Dean Gold on the face during a tussle on March 20 last year, smashing his camera to the ground. He was cleared of both assault and criminal damage. Palestine Solidarity Campaign activists in the public gallery cheered and whooped as the verdict was announced, shouting, “Zionists always lose,” at Mr Gold’s family and friends as they left court.

When there is physical violence and intimidation against Jews in the UK, local PSC activists are often not too far behind.

The PSC is not simply a political pressure group. Its local chapters contain violent thugs who wish physical harm to Jews, and the PSC leadership has been unsatisfactory and unconvincing (at best), in trying to curb this.

Like the EDL, the PSC should be considered a group too full of fascists, to be taken seriously politically. 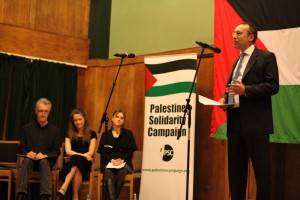