You can hardly have missed the headlines:

Four men inspired by al-Qaeda have admitted planning to detonate a bomb at the London Stock Exchange. Mohammed Chowdhury, Shah Rahman, Gurukanth Desai and Abdul Miah pleaded guilty to engaging in conduct in preparation for acts of terrorism. The men, from London and Cardiff, were arrested in December 2010 and were set to stand trial at Woolwich Crown Court. Five other men have pleaded guilty to other terrorism offences and all nine will be sentenced next week. The men, who are all British nationals, had been inspired by the preachings of the recently-killed radical extremist Anwar Al-Awlaki.

It goes without saying that their targets included Jews:

A hand-written target list discovered at the home of one of the men listed the names and addresses of London Mayor Boris Johnson, two rabbis, the US embassy and the Stock Exchange

As the Guardian reports:

Two other members of the group were recorded by a police surveillance operation denying the Holocaust.

And, although it has not been reported widely, the men were connected to the banned terrorist group, Al Muhajiroun. From The CST Blog:

The “radical groups” that the men were associated with were al-Muhajiroun and its various successor groups, including Islam4UK and Muslims Against Crusades, which have been proscribed (pdf) by the government. This is no surprise: one research report (pdf) found that 15% of UK nationals convicted of Islamist terrorist offences had links to al-Muhajiroun or its successor organisations. Some details of the defendants’ connections to these groups appeared in the media at the time of their arrests, and it is likely that more will emerge in the coming days.

Here is Mohammed Chowdhury, the leader of the terrorist plot, holding an Islam4UK placard. It is tempting to think of Anjum Chouhdry and his crew as rentaquotes who exist to give the Daily Mail copy. That is a great error 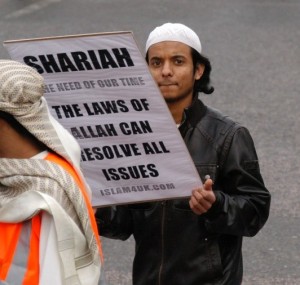 The first act of jihadist terrorism committed by a British citizen was the murderous suicide bombing in Mike’s Bar in Tel Aviv, in 2003. Omar Khan Sharif, one of the terrorists, was an activist in Hizb ut Tahrir, which was run by Omar Bakri Mohammed. His faction became Al Muhajiroun. It took only nine years for that group to graduate from murdering Jews to trying to murder British civilians.

And here is Mohammed Chowdhury flanking Anjum Chouhdhury, who is arguing with Douglas Murray. 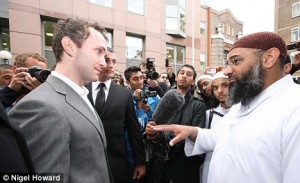