Even though it was half a decade ago, the year I spent living in Damascus had a profound effect on my life. Pretty much every single assumption, value, belief, and opinion I had of the area got turned on its head. Not only that but the Middle East stopped being a single-issue affair with a simple solution and became a weird, complex, chaotic, dysfunctional, unstable equilibrium of ambiguities, paradoxes and contradictions.

There were no longer any easy answers. It was as if the choice between good and bad no longer existed, all that was left were the options of bad or worse. I guess you could say that 2006 was when I finally lost my innocence.

Syria is now a major news story. Yet even before the current uprising there was a lot written about it– though most of that was either the generic “magic of the souq” cliches, the “oh, she’s so pretty!” PR-scripted puff pieces or the “media-savvy modernizer” line.

Since the uprising began, people now see the true face of Ba’ath rule and there is a lot being written about what’s going on. Most of it covers events which have taken place or tries to predict what could happen next. It tends to tell us what we already know and leaves the messy complexities and ambiguities alone.

However this article in The New Republic is different. While I don’t agree with everything the author says (Kurds certainly aren’t welcome in this Ba’athist “realm of unreality”), it’s one of the best I’ve read on the subject and has stirred all sorts of vivid memories of my time there.

The writer Theo Padnos captures the inherent unique strangeness of Syria under Assad rule which I’d forgotten about. I’ve commented on sections of the article but it’s well worth reading in full.

Many Damascenes these days prefer to watch the government-run TV stations. Elsewhere, the news is bad. The local channels, with local announcers, speaking in proper Syrian Arabic, are often sweet. Often the broadcasters on these stations are beautiful young women. They smile a lot. Their channels say that in some outlying districts, vandals and religious fanatics have moved in, and have had to be removed by the army. But now all is back to normal.
[….]

And there it was, the Syrian magic trick at work: The TV had shown tranquil Friday afternoon scenes. Before our eyes, an empty passageway stretched toward Straight Street in one direction and the Omayed Mosque in the other. Somewhere far away, outside Syria, some “journalist” or “interest” or “element” was spreading rumors of nineteen people killed and chaos in the streets. “Why do they do this?” the pro-government people in Syria want to know. “Why do they hate us?”
[….]
The silence is especially loud on Friday mornings in the squares surrounding the ministry of the interior. From 8:00 onward, police buses on their way to Kisweh, Medan, Qaboon, and wherever else protests are likely to flare up roll through these squares. The passersby in the street know that the bus passengers will soon be killing people, and that their weapons are loaded now. No taxis get in their way. The pedestrians stare at the pavement. The buses glide by like ships on a lake. No one wants to notice what the police are up to because noticing might attract notice. In any case, the buses no longer hold much mystery. The demonstrators will soon be chanting. They will soon be shot.

Yet even this “Truman Show”-esque illusion of normality which the Syrian media puts so much effort into maintaining can’t be sustained in the face of reality as this clip from Syrian State TV makes clear. It’s from the show “Good Morning,” which is exactly the same as every other daytime TV show on the planet. It’s light, presented by a very pretty woman and the audience at home is predominately women with young children. So the subject matter is mostly issues which affect them.

And the woman in the clip is saying standard daytime TV stuff: “I don’t like to talk about my personal situation but with me when they were… when I became pregnant and had children I tendered my resignation, but when they reached 6 or 7 years old I returned to work. So if you’re asking me about my personal life I’m sure that….”

However look what’s going on behind her.

Everybody watching can see the convoy of buses and trucks and knows they’re full of soldiers and security armed to the teeth and on their way to kill protesters, as they’ve been doing for the past six months now.

Padnos also writes about a de-Alawisation of Syria, paradoxically carried out by the Alawite Hafez al Assad, describing it as a process of Sunnification, where an already secretive religion became even more hidden.

Here Padnos gives a fascinating description of the Alawite religion’s beliefs, something I knew nothing about mainly because talking about them in Syria was such a taboo.

Alawis believe all humans were once stars, that by a seven-step process of metempsychosis, a pious soul can regain his place in the Milky Way and that impious souls come back as animals. Alawis celebrate the Zoroastrian holiday Nowruz, which marks the arrival of spring, and sometimes celebrate Christmas. It’s not very Islamic to drink wine. It’s very un-Islamic to read esoteric meanings into the Koran. Alawis use wine in their rituals and believe that the manifest meaning of the Koran (and the Sharia) is a veil that covers truer, deeper meanings. Traditionally, Alawis have not built mosques but have rather prayed in the family home, or out of doors. They are said to worship the sun and the moon because these are aspects of the divine; the air, because god has dispersed himself into the ether; the stars, because one’s ancestors abide there; and the fourth Caliph, Ali, because he is the patron of their sect.

In light of this information, a photo I took when I was there now makes sense. Whereas most of the Assad images were in your face 24/7 this one was discretely tucked away just under the ceiling of the old railway station near the main post office. (It was later removed.) 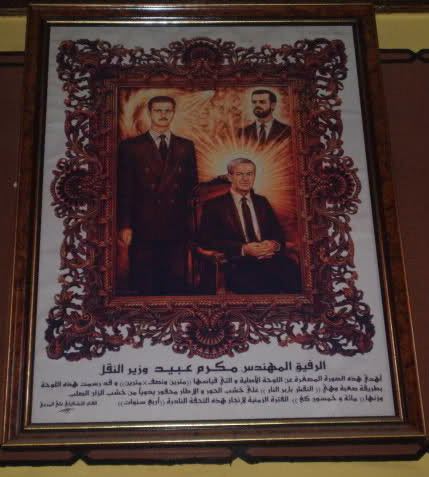 It appears esoteric and has weird comet, sun and star imagery in the background rather than the industry-standard dictator halo. 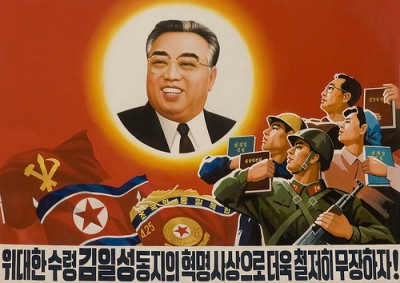 And it appears at odds with the rest of the Assad propaganda imagery.

It shames me to my core to say this but strangely this paragraph moved me.

Performances like [this interview on Syrian TV] tend to remind audiences in Syria of what Bashar Al Assad wanted to be when he had the choice: There was an ophthalmologist’s career in London in the offing, a pretty English wife, and a string of healthy Anglophone children.

It reminded me of a conversation I had a few years ago about Assad with a Syrian I knew, who happens to be an Alawite. He looked crestfallen and told me that if Bashar had been anybody else’s son he’d be someone you’d want as a friend. But that wasn’t to be.

Chances are that later on I’ll switch on Al Arabiya or Al Jazeera, hear about yet another child having been mutilated, decapitated or tortured to death by the forces under Assad’s command and deeply regret having just written the above. (And that’s without reminding myself of the Lebanese, not just politicians but also journalists and intellectuals, who were murdered under Assad’s watch– people like Samir Kassir and Gibran Tueini.)

I guess ultimately totalitarianism devours everybody, even those at the top. Padnos’s article notes that it’s safe to assume Hafiz Al Assad did a number on his own kids. I’d agree with that.

Again, it’s worth reading in full.