Forbes informs us about events yesterday:

Protesters also took action in the Greek capital, with a small group of activists from a Spanish-run boat entering the Spanish embassy in Athens and starting a sit-in, hanging a Palestinian flag from a balcony and demanding that Spain pressure Greece to let their boat sail.

Manuel Tapial, a spokesman for the Spanish vessel Gernika, said the protesters were peaceful. A statement from the organization in charge of the vessel, Rumbo a Gaza, said protesters were not interfering with the work of embassy staff.

Here are the (rather image-conscious) protestors:

This is flotilla organiser Manuel Tapial, who organised the protests outside the Spanish embassy in Greece: 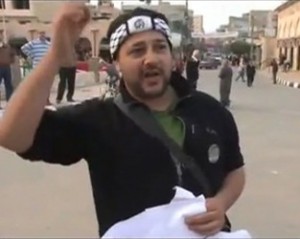 Tapial is a member of the Spanish charitable organisation Paz, Cultura y Solidaridad (Peace, Culture & Solidarity) – of which Tapial’s father, Manuel Escobar, is the head.

Last year Tapial was on the Mavi Marmara.

Following his antics in 2010, here he is Tapial getting a hero’s welcome in Barcelona by adoring fans at 0:31, like a popstar arriving for a gig or a footballer returning from the World Cup:

He gave various interviews to Spanish media about what happened on the ship, and tried to argue in one interview in Leganes that there were no weapons on-board the ship, castigating Spanish conservatives for daring to suggest otherwise:

“It’s lamentable that [the Partido Popular] has accused us of sharing Hamas’ aims, or allying with other radicals in the Arab world. They even argued that we carried weapons! They took as valid, the Israeli embassy in Spain’s version of events, and that’s the position they were defending. If they’d only contacted us about the reality we went through, they wouldn’t accuse us of these things.

Weapons – and expired medicine taken from a Swiss hospital.

Tapial is a dangerous liar.

These were found aboard the Mavi Marmara: 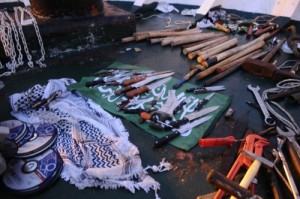 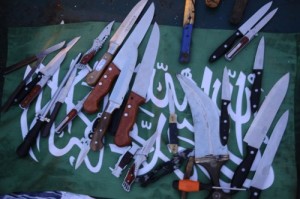 Tapial is a reckless man who puts lives at risks.

Yet a week after the Mavi Marmara, he told interviewers he hoped to return with a second flotilla, with twice as many boats.

When a Spanish politician wore two Stars of David in a local meeting in Leganes to express solidarity with Israel,

The citizens of Leganes should know these facts. We could compare this with an ETA member going to a meeting with photos of the people he’s killed. That’s the same outrage our families felt when we saw this. […] I’d tell her she should go live in Israel.

This is what Tapial had to say about the Madrid train bombings and 9/11:

How can it be that countries support by action or omission, a state like Israel, that with its bellicose policies is at constant war with the Arab world? What interests do our politicians defend? How many 11-Ms or 9-11s do we need?

He thinks the West needs terrorism to stop them being pro-Israel. If we haven’t got the message yet, bring on a few more terrorist atrocities.

Here he is in Turkey with Hussein Orush of the IHH: 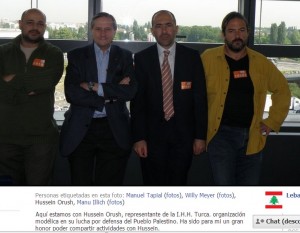 Here is a Youtube video of Tapial in Istanbul, produced by the IHH:

Let’s have a look at whom Tapial’s “Peace, Culture & Solidarity” outfit have hosted recently:

That is, Ahmet Emin Dag, vice-President of the IHH, and an organiser of the last flotilla.

These are the sort of people Tapial mixes with, and these are the people who have organised both flotillas.