It’s good to know that the successful effort by Russia and China to block a UN Security Council resolution condemning the Syrian regime’s attacks on peaceful protesters has not gone unnoticed in Syria. 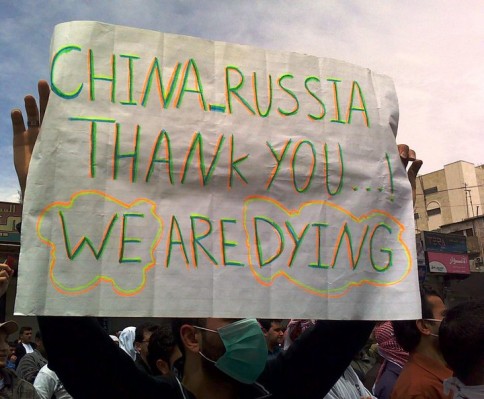 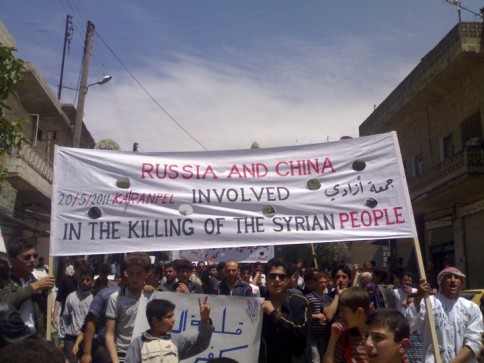 Clearly not Bashar al-Assad’s favorite targets. I’m reminded of the man with a loudspeaker in Tehran a couple of years ago who screamed: “Death to US, death to Israel, death to the infidels, death to England” and so on. But every time the crowd responded “Death to Russia.”

And Kuwait is far from a paragon of human rights, but I suppose it’s a small victory that it, rather than Syria, will serve on the UN’s Human Rights Council.

“Syria’s candidacy was obviously beyond the pale, but the issue is why it was able to run uncontested for a council seat in the first place,” said Peggy Hicks of Human Rights Watch.

“Kuwait’s human rights record may be preferable to Syria’s, but that’s a remarkably low bar to meet.”

Other rights groups and governments have also criticized Kuwait for its lack of democratic rule. The US State Department’s last human rights report on Kuwait pointed to only “limited” freedom of speech, religion and assembly.

“Today Syrians gathered in front of the Russian Embassy in Damascus expressing with flowers (!) their thanks for the sincere Russian position in standing by the side of Syria’s sovereignty and independence and its rejection of the external [foreign] attempt to interfere in its affairs.“