Rainbow Hamlets, the Tower Hamlets LGBT Forum, has learned that British Transport Police have charged an 18 year old man with displaying threatening, abusive or insulting material within the sight of a person likely to be caused harassment, alarm or distress. This is an offence under section 5 of the Public Order Act 1986 and the maximum penalty is a £1,000 fine. We understand that the charges arise from the posting of “gay free zone” stickers at Bow Church DLR station in February and that the defendant was identified from CCTV images.

While we welcome the news that criminal proceedings have finally been instituted in response to the stickers, we are disappointed the Crown Prosecution Service felt that more serious charges are not appropriate. This is only one step up from bill-posting.

To us, the stickers represented a deliberate attempt to undermine community cohesion in Tower Hamlets; they have had a deeply divisive effect upon the entire LGBT community and we do not believe that the CPS has given due consideration to the wider range of charging options available to them.

Those behind the campaign must have been aware that LGBT people would have been upset by the stickers. It is simply not credible that those responsible for posting the stickers did so without intent either to cause alarm or distress, or alternatively to threaten or intimidate LGBT people in Tower Hamlets.

We have therefore formally requested a review of the decision at an appropriate level and have asked to meet with the Crown Prosecution Service so that they can explain more fully the reasons underlying it.

In commenting on the case, co-chair of Rainbow Hamlets, Rebecca Shaw said:

“This news also confirms the result of our own review of current hate crime legislation, that it offers varying levels of protection to individuals depending on the nature of the offence committed against them. If the stickers had instead discriminated on the basis of race or religion, the defendant could have been charged with aggravated public order act offences under the Crime and Disorder Act 1998. Such offences are imprisonable. We reject strongly the resultant presumption that hate crime targeted at LGBT people should be perceived as less significant than religious or racial alternates or indeed that when LGBT people experience hate crime they are less deserving of a framework which offers a robust response. This is a matter on which we will be pressing Parliament for change in the near future.”

“ Whatever any community’s religious teaching, this is entirely separate from its duty to develop good relations with its neighbours and other communities of culture and belief (including LGBT people).  Regardless of the doctrinal position, no person should ever suffer bullying, harassment or hatred for being LGBT or for being close to someone who is. No preacher should ever incite hate.

We have been working together with local faith leaders to establish common ground and have already issued clear joint statements locally condemning the stickers and homophobia. We look forward to welcoming local Muslim, Christian and Jewish leaders alongside LGBT people and people of faith from across London to our conference on Faith Communities and Homophobia to mark the International Day Against Homophobia and Transphobia on 17 May.”

Mohammed Hasnath is not a very common name. Therefore, although we may be wrong, it could be the fellow whose Facebook page is displayed below.

You’ll see that one of his few “Likes” is the Islamist hate preacher, Khalid Yasin.

Khalid Yasin is an extremist, a 9/11 troofer and a fraudster. This is what he makes of homosexuality:

There’s no such thing as a Muslim having a non-Muslim friend. If you prefer the clothing of the kafirs over the clothing of the Muslims, most of those names that’s on most of those clothings is faggots, homosexuals and lesbians. [opening of the documentary]
…
The Koran gives a very clear position regarding homosexuality, lesbianism and bestiality – that these are aberrations, they are immoralities and if they are tried, convicted, they are punishable by death. [15:30]

Khalid Yasin has also cropped up in an ongoing criminal trial as one of the “inspirational imams” to which British men, being groomed for jihad in Afghanistan, was introduced. 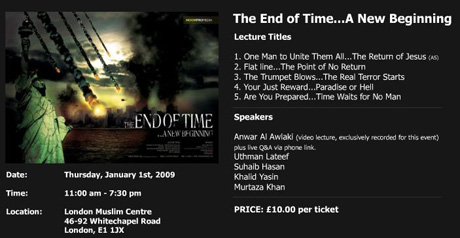 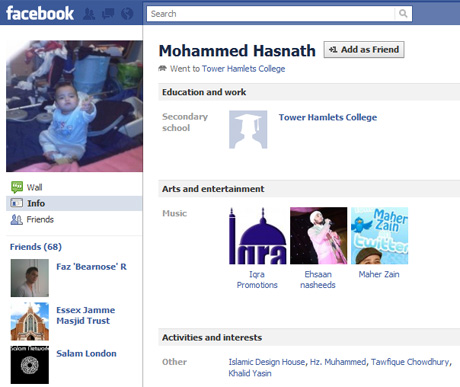