Anwar al Awlaki is an American Islamist of Yemeni origin. He preaches to the world from Yemen, using the internet.

He’s not a shy man. One of his latest works, published on his blog in January 2009, is a pamphlet titled “44 Ways To Support Jihad”. It opens this way:

Jihad is the greatest deed in Islam and the salvation of the ummah is in practicing it. In times like these, when Muslim lands are occupied by the kuffar, when the jails of tyrants are full of Muslim POWs, when the rule of the law of Allah is absent from this world and when Islam is being attacked in order to uproot it, Jihad becomes obligatory on every Muslim. Jihad must be practiced by the child even if the parents refuse, by the wife even if the husband objects and by the one indebt even if the lender disagrees.

Dear brothers and sisters the issue is urgent since today our enemy is neither a nation nor a race. It is a system of kufr with global reach. The kuffar today are conspiring against us like never before. So could we be heading towards the great battle between the Romans and the Muslims – Al Malhamah – which the Prophet (saaws) spoke about?

Again, the point needs to be stressed: Jihad today is obligatory on every capable Muslim. So as a Muslim who wants to please Allah it is your duty to find ways to practice it and support it.

You don’t have to be a student of jihad to imagine what follows. However, please do read the pdf  if you’d like to delve deeper into Awlaki’s world view.

Here is one excerpt that is not central to the message of violence, but does show just how voracious the insanity that has taken Awlaki’s mind can be:

The danger of the Western media stems from the fact that it puts on the cloak of truth and objectivity when in reality it is no more than the mouthpiece of the devil. Can’t you see that the Western media is constantly trying to underplay the atrocities committed by the West while exaggerating the violations – which are few and far in between – committed by Muslims? Can’t you see how the Western media succeeded in presenting the awlyaa’ (friends) of Allah, the ones who are fighting in His cause, as the followers of evil, while it presents the Pharaoh of this day and his armies as the army of good? The Western media is so good in its deception that its lies pass on a wide section of the Muslim ummah.

The fact is that this media demonizes the mujahideen, spreads lies about them, blows out of proportion their mistakes, tries to sow the seeds of disunity amongst them, attempts to ruin the reputations of their leaders, and ignores or demonizes the scholars of truth when on the other hand, it glorifies and promotes the scholars of falsehood.

Mr Awlaki has quite a history in Islamist extremism. When he was living in America, he had connections with some of the 9/11 hijackers; the Holy Land Foundation charity, a Hamas front that has since been busted; the Charitable Society for Social Welfare, another charity that US prosecutors have called an al Qaeda front; an associate of Abdel Rahman, the convicted spiritual leader of the group that bombed the World Trade Center in 1993; and Ali al Timimi, another convicted terrorist. The NEFA Foundation has summarised these stories and provided references in this pdf, should any readers be interested. A shorter version of various serious allegations against Awlaki is available in this Washington Post article of February 2008.

Awlaki left the US for London in 2002. While in the UK, he spoke at events organised by the Islamist extremists of the Muslim Association of Britain (as Louise Ellman, correctly alarmed, noted at the time) and the Young Muslim Organisation.

In 2004 he moved to Yemen. In 2006 he was arrested by the Yemeni authorities and held for a year and a half. In the end no charges were filed and he was released, with a big boost in jihadi street cred to his name.

In fact, this background greatly reinforces the weight of his words when they are so violent and hateful. America is on guard, as one of its security officials indicated in October 2008:

Another example of al-Qa’ida reach into the Homeland is U.S. citizen, al-Qa’ida supporter, and former spiritual leader to three of the September 11th hijackers Anwar al-Awlaki — who targets U.S. Muslims with radical online lectures encouraging terrorist attacks from his new home in Yemen.

Awlaki has hardly forgotten London. On 1 January 2009, just days before he published “44 Ways To Support Jihad”, he appeared via a video link with Yemen in a talk and live Q&A session at the London Muslim Centre in Whitechapel.

That centre, part of the East London Mosque, has appeared in HP coverage before, of course, most recently when an emissary of a vicious Afghan warlord who has attacked coalition troops and the government of Afghanistan was invited to speak there.

The title of the 1 January event at the London Muslim Centre was “The End of Time …A New Beginning”. The event poster, widely circulated on British Islamist forums, invoked one of the fondest of extreme Islamist dreams: 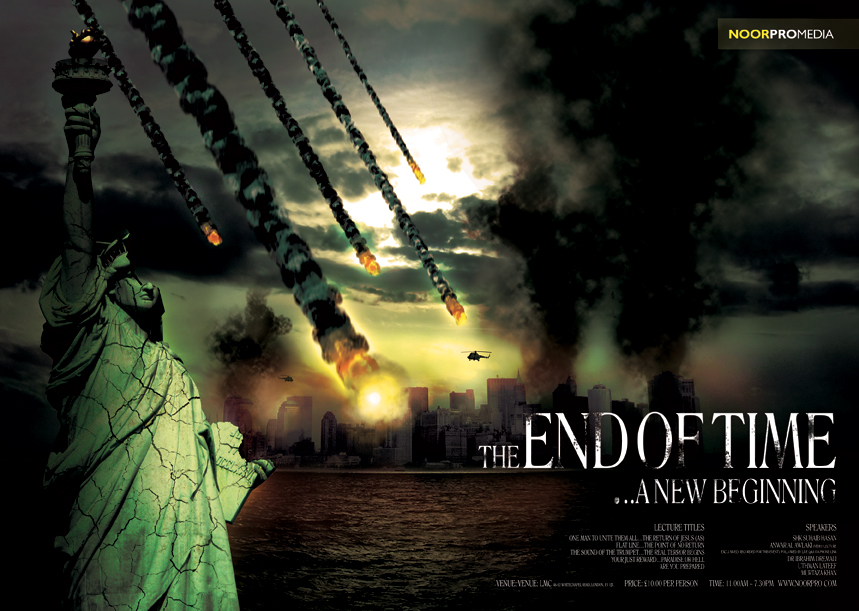 Beyond the London Muslim Centre, in recent years other UK channels for video links to Awlaki have included the University of Westminster Islamic Society and the Al Huda mosque in Bradford. Many more British Muslims are reached by blog posts, e-mail, links in Islamist forums, and DVDs and CDs.

One of them is of course Azad Ali, the suspended Treasury employee, head of the Civil Service Islamic Society, and Islamic Forum of Europe blogger. Ali has said Awlaki is “one of my favourite speakers and scholars” and “I really do love him for the sake of Allah, he has an uncanny way of explaining things to people which is endearing”.

Awlaki was no radical exception at the “End of Time” event. Another somewhat popular American Islamist speaker was Khalid Yasin. You can gauge his political sanity in this video, where he claims the AIDS virus was a “conspiracy”. It was manufactured in the US and spread by the World Health Organization and Christian missionaries, you see:

There may be more to say about Mr Yasin at HP in future. For now, if you want to learn more, please see this Australian broadcast about him (he spreads hatred in that country too) and this blistering attack by Abdur-Rahman Muhammad, an American Muslim blogger who knows Islamist messages well. Muhammad has Yasin’s number:

It is because of people like Khalid Yasin that a whole generation of Muslim youth are growing up feeling like the world is against them, and lay all the blame for the stagnancy and utter backwardness of Muslim society at the doorstep of the “West”. And he preaches this message in countries where Muslim youth have a better chance of making it than anywhere, the U.S, Britain, and Australia. From whatever angle you approach it, this is a bad guy.

The Telegraph noticed the “End of Time” event and wrote it up here. The East London Mosque did not take kindly to the coverage and responded indignantly, citing free speech as one of its defences.

Free speech has been much discussed at HP and elsewhere over the past two days. Well, if you are a free speech purist, rejoice, for short of a Chinese-style dictatorship the internet is on your side. Even if Jacqui Smith did ban Awlaki from entering the UK (the East London Mosque claims he is free to enter the country), what will she do next time there is a video link event? Nip down to Whitechapel and cut the London Muslim Centre’s phone lines?

No, what is needed, above all, is detailed and sustained scrutiny and criticism of Islamists who provide platforms and promotion for the most odious, insane and extreme messages of the “ummah”.

Local councillors, MPs and ministers should take the lead and the East London Mosque should be one of their top targets.