‘Information wants to be free’ is the cry of the internet activist.

WikiLeaks begs to differ. And Julian Assange thinks he’s able to value the information that comes his way too.

A copy of a WikiLeaks staff Confidentiality Agreement was leaked to the New Statesman yesterday. It’s very tightly worded and makes disclosing information from Julian Assange’s vehicle once it has entered WikiLeaks a very serious business indeed.

My favourite clause is this:

You accept and agree that the information disclosed, or to be disclosed to you, pursuant to this Agreement is, by its nature, valuable proprietary commercial information, the misuse or unauthorised disclosure of which would be likely to cause us considerable damage, and accordingly you concede that, without prejudice to any other rights and remedies available to us in respect of any breach of this Agreement, we are entitled to relief by way of injunction including any interim order available from any competent court having jurisdiction over its terms.

The parties agree that a genuine and reasonable pre-estimate of the loss to WikiLeaks from a breach of this Agreement based on a typical open market valuation for the information for a significant breach of the Agreement is in the region of £12,000o (twelve million pounds sterling).

It’s difficult to disagree with the New Statesman’s conclusion on the nature of  Saint Julian’s little outfit:

Another God worshipped by the gullible turns out to have feet of clay. 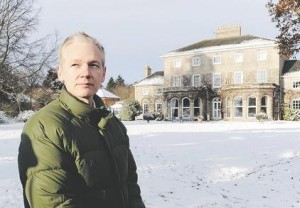 The Abortion Retry That Can’t Be Ignored