As Barack Obama’s administration ends its dithering over what to do about Libya and urges the UN to authorise Libya air strikes, ahead of today’s vote, the Guardian has disappointed as it joins those calling for the West to allow Libyans and other Arabs to act alone. Doesn’t that simply translate as leaving them to their fate?

“There are military considerations, too, that could limit Gaddafi’s ability to retake and hold Benghazi: he would need to commit significant numbers of men which he does not have. A military stalemate looks more likely. If saving lives is the primary concern, Turkey’s offer to negotiate a ceasefire in Libya becomes more attractive by the day.

“The Arab League is split and western military intervention risks hijacking a popular revolution. This is about forging what both dictators and former colonisers alike have denied the people: a pan-Arab identity. To succeed, they needs to do it on their own,” says the Guardian in an editorial today.

The speed at which Gaddafi and his men have moved in these last few days makes a stalemate look increasingly unlikely.

The Guardian itself reports today about how Gaddafi’s forces are pressing their assault on Ajdabiya with only Benghazi remaining in rebel hands. It is as David Aaronovitch tweeted this morning more honest to admit Gaddafi will win. 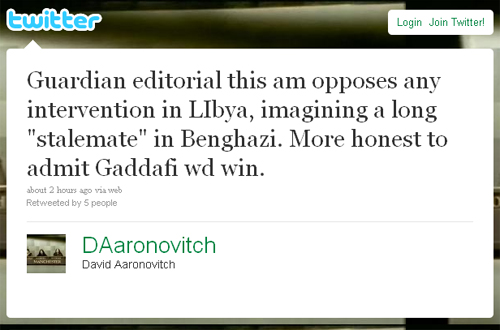