On 8 May the Quaker meeting hall will welcome Friends of Al Aqsa, the Israel hatred lobby of British Islamist activist Ismail Patel. 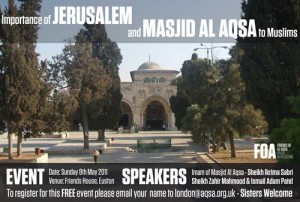 Patel will be one of the three speakers. His view on Hamas? As he said at a pro-Hamas demonstration in London in January 2009, salute it.

Hamas is no terrorist organisation. The reason they hate Hamas is because they refuse to be subjugated, occupied by the Israeli state, and we salute Hamas for standing up to Israel.

Zahir Mahmood, an Islamist preacher and Viva Palestina activist, is another scheduled speaker at the event. He loves Hamas too, as you can see from proceedings at a Viva Palestina meeting in Birmingham in March 2009:

By Allah, history will remember George [Galloway] as a hero. And the other thing is that we cannot allow the perverted narrative to remain the norm. Hamas are not terrorists. They’re freedom fighters, they’re defending their country.
…
Alhamdulillah [praise to God], Ismail Haniyeh [the Hamas leader in Gaza], the prime minister of Palestine, has given all those who went on the convoy Palestinian passports. We are Palestinian nationals!

The third speaker is Ekrima Said Sabri, a former grand mufti of Jerusalem. He is a Holocaust denier (a translation of that interview is available here):

Six million dead Jews? Not at all, they were far fewer. Let’s stop it with this fairy tale exploited by Israel to capture international solidarity. It is not my fault if Hitler hated Jews, after all people hate them a little everywhere.

Sabri certainly does his bit for hatred:

I enter the mosque of Al-Aqsa with my head up and at the same time I am filled with rage toward the Jews. I have never greeted a Jew when I came near one. I never will. They cannot even dream that I will. The Jews do not dare to bother me, because they are the most cowardly creatures Allah has ever created…

He is also keen on The Protocols of the Elders of Zion, the notorious antisemitic hoax:

Ikrima Sabri, Mufti of Jerusalem, appeared on Al-Majd satellite TV to comment on the assassination of Rafik Hariri, the former Lebanese Prime Minister, and said: “Anyone who studies The Protocols of the Elders of Zion and specifically the Talmud will discover that one of the goals of these Protocols is to cause confusion in the world and to undermine security throughout the world.”

For Sabri, Islamic tales about the end times are a good guide to Jews’ behaviour today. According to a British imam who has met him, Sabri has said:

I asked the mufti of Palestine in my last meeting with him, Ekrima Sabri, I asked is it correct, because I listen from my sources, that they [the Jews] have planted gharkad trees everywhere in the area between Tel Aviv to Lod? He said that is true.

The gharkad trees are of course a Hamas favourite, as you will see in the terrorist group’s charter:

Moreover, if the links have been distant from each other and if obstacles, placed by those who are the lackeys of Zionism in the way of the fighters obstructed the continuation of the struggle, the Islamic Resistance Movement aspires to the realisation of Allah’s promise, no matter how long that should take. The Prophet, Allah bless him and grant him salvation, has said:

“The Day of Judgement will not come about until Moslems fight the Jews (killing the Jews), when the Jew will hide behind stones and trees. The stones and trees will say O Moslems, O Abdulla, there is a Jew behind me, come and kill him. Only the Gharkad tree would not do that because it is one of the trees of the Jews.”

“Martyrdom” is great too, Sabri says, especially if it is a child killing himself:

Yes, it is. It’s hard to express it in words. There is no doubt that a child [martyr] suggests that the new generation will carry on the mission with determination. The younger the martyr – the greater and the more I respect him… One wrote his name on a note before he died. He wrote: ‘the martyr so and so.’ In every martyr’s pocket we find a note with his name on it. He sentences himself to martyrdom even before he becomes a martyr.

Friends House is plainly determined to welcome racists and supporters of terrorist violence, even though its lettings terms state:

A booking may be refused if:

– The aims and policies of the organisation or individual are in serious conflict with Quaker beliefs. Written details of the aims or policies of new groups wishing to hold meetings in Friends house are normally requested

If you would like to make your views on this issue known to British Quakers, you could write to: