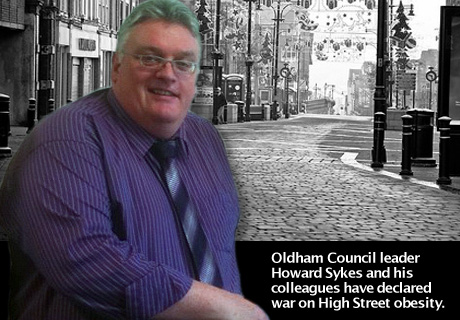 The Oldham Council thinks it has found a way to legally extort money from local businesses. According to reports in today’s papers, they will charge £1000 levy on fast food businesses which they will use – they say – towards funding healthy eating campaigns and litter-picking. Of course if they get away with this dressed up mob-style racket, other councils will undoubtedly follow suit.

I do hope small business owners in the catering and hospitality industries file a joint action in the courts to challenge this. For a start, there is a legal precedent that holds that businesses cannot be held accountable for litter. Litter, quite rightly, is the responsibility of the person dropping it, not the company whose logo is on the box or packet. This was the finding of the court during the ‘McLibel’ trial. The judge remarked:

I am far from persuaded to the standard required that McDonald’s, including either Plaintiff, is in ordinary good sense “to blame” or culpably responsible for litter which has left their restaurants as packaging in customers’ hands. I do not consider that they can fairly be blamed for it just because they have provided disposable packaging. The Plaintiffs clearly feel some understandable civic obligation to clear up that which falls reasonably near to its restaurants.

My conclusion from the evidence which I accept is that McDonald’s restaurant frontages have been kept clear of litter, but that the system of regular patrols to clear up litter rather further afield has often broken down. I do not, however, consider that failure to achieve their objective of more extensive clearance makes them culpably responsible for what is left on the streets away from the actual fronts of their stores, or responsible at all for items of their packaging which are dropped some munching or drinking distance away. In my JUDGEMENT the blame for all that lies firmly on the inconsiderate customer.

So good luck to Oldham council trying to defend a new tax holding businesses responsible for what their customers do after they’ve left the premises. It really is quite pathetic. Do the British public have no free will or personal agency? In the view of some local councils, apparently not!

But of course this is what is at the heart of this new extortion, particularly the second part. Mr A has a kebab shop in Odham. Now Oldham Council wants Mr A to pay towards an “educational programme” to persuade Oldham residents not to buy anything from Mr A’s shop. This is perverse.

If people eat an unhealthy amount of kebab, or hamburger, or chicken, or cheese pie, or donut, why is it the shopkeeper or restaurateur’s fault? If you’re too fat, it is your no one’s fault but your own. If you want to be healthy, get on your bike.

Of course, government-assisted personal responsibility avoidance is not new. Why, only last month shopkeepers were blamed for making people drunk. After all, this is the United Kingdom and we’re all zombies without free-will. We’re becoming a pathetic shell of a once great nation: a nation with hardly enough will-power to stay sober or just say ‘no’ to cream pies and french fries. We need police and social engineers workers to stop us stumbling around in a drunken stupor, cramming our faces with lard while we smoke ourselves to death. Thank goodness we have these brave warriors to throw another ‘sin’ tax in our path to save us from ourselves.

Normally, this is the point where I’d say that it is the role of our government – national and local – to educate the public about the dangers of X, Y or Z so that we can make up our own minds. The trouble is, too many local councils are staffed by total imbeciles who are too stupid and incompetent to do even that! The proof?

The Oldham Council is considering “exemptions” for “healthy” foods, like “smoothies”. Yes indeed. According to The Metro:

The council says the £1,000 levy would apply to any business wanting a licence to serve takeaway food. Some takeaways, such as smoothie bars, may be exempt if they can show their menu is healthy.

A smoothie is NOT “healthy” if your aim is to combat obesity. Maybe these cloud-cuckooland do-gooders think that because something is ‘organic’ and poncy, it is not fattening. But a fruit smoothie, often sweetened with honey and mixed with yogurt, can have a calorie count of around 500 – more than a Mars Bar. Some smoothies can be a whopping 750 calories. That’s almost  40% more than a Big Mac and more than a whole pizza.

The Sun illustrates their coverage of the story with a photo of a kebab shop. Funny that these are being targeted as “unhealthy”. A Times report points out that, if you forgo the sauces, a shish kebab is only 232 calories – half the supposedly “healthy smoothie”.

Besides, why are these councils even targeting fast food outlets. Have you looked at the calorie count on a supermarket sandwich? Check the calorie count of one of those “Meal Deals” (sandwich, crisps, can of cola) you can get from WHSmith or Boots fridges. It can be over 1000 calories! Isn’t the chippie or kebab shop just the easy target? The target of bigots and food fascists?

The fact of the matter is these councillors work on badly tuned ‘intuition’ where they see “fat” as “fattening (it isn’t necessarily), while sugars and carbohydrates are invisible (though a leading cause of obesity). They confuse “organic” with healthy and can’t understand that a food can be both healthy and fattening.

It seems it is too much for them to digest, so they just spit out more taxes. That way they look “concerned” and like they’re “doing something”. But they’re idiots. And we’re idiots too for putting up with this attack on our personal autonomy. Are we free or not?

The more I think about this, the more angry I get. As if the health and nutritional illiteracy isn’t enough, the economic illiteracy this council displays really is quite staggering. These council morons will end up making the problem worse. Here’s why.

Ask yourself: What is the likely reaction of the reasonable business owner if running costs go up, but the market is too competitive to raise prices?

Well, there are two options. In the fast food industry, the first option would be to use cheaper ingredients. That usually involves padding out the food with more starch and fat and compensating for the loss of natural flavour by adding more sugar, salt and artificial flavour enhancers. Here’s to your health!

The second option would be to market more aggressively and try to sell more product. This isn’t quite what Oldham council want, but it is what they will achieve! (actually, they claim they don’t want more fast food shops opening up, but in reality they don’t mind if a thousand quid greases the wheels.)

Most likely, a business will compensate for the new costs imposed by a combination of the two options above: more aggressive marketing of cheaper product.