Here is a photograph (click to enlarge) from a press conference held earlier today in Latakia, Syria, by Viva Palestina, George Galloway’s mission for the political and material support of Hamas.

In the centre are Galloway and Kevin Ovenden, a trustee of Viva Palestina.

Standing on the right is Zaher Birawi, the spokesman for Viva Palestina on its convoys for Hamas.

Deceased Syrian dictator Hafez al Assad beams down on them all from the portrait at the top right. 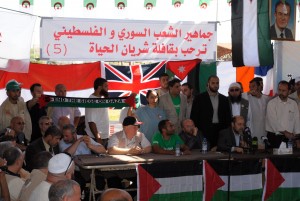 Who is the man at the microphone on the right? It’s Mousa Abu Marzook, deputy leader of the political office of Hamas in Damascus.

He is also a key moneyman for the terrorist group. He is subject to specific sanctions (pdf) by the Bank of England.

He was indicted in the US, in absentia, in 2004 for racketeering on behalf of Hamas. He had been a central figure in Hamas fundraising operations in the US in the 1990s. Here are some excerpts from the indictment (pdf):

He presently lives in Damascus, Syria, and is the Deputy Chief of the Hamas Political Bureau. The Political Bureau functioned as the highest ranking leadership body in the Hamas organization, setting policies and guidelines regarding Hamas’s activities, including directing and coordinating terrorist acts by Hamas and the Al-Qassam Brigades.

Marzook was indicted in absentia because he had been arrested in New York in 1995 and deported to Jordan. He didn’t dare to try coming back to the US.

The US funding network for Hamas that he helped to build was brought to a definitive end in 2008, when the leaders of a US “charity” called the Holy Land Foundation were found guilty of financing Hamas and imprisoned.

Going back to the photograph, the man at the left end of the table is Muhammad Sawalha, an important Viva Palestina operative. He is also a fugitive Hamas commander who appears in Marzook’s indictment:

Mr Sawalha has had a very good run in the UK. Like a number of other Islamist extremists covered on this blog, he found sanctuary in the UK under the last Tory government of John Major. No one has even tried to bring him to book for working for Hamas from London, under the Tories or Labour. The same is true of Viva Palestina itself.

Perhaps that will change under the current Tory-led government.

Though for now I doubt it.