A Dutch appeals court has found against the Arab European League for publishing a Holocaust Denial cartoon on its website in 2006, according to Reuters:

A Dutch Muslim group was fined 2,500 euros ($3,200) for publishing a cartoon which suggested the Holocaust was made up or exaggerated by Jews, a Dutch appeals court ruled on Thursday.

The court in the western city of Arnhem overruled an acquittal handed down by a Dutch lower court, saying the cartoon, published on the website of the Arab European League’s (AEL) in 2006, was “unnecessarily hurtful.”

“The court points out that the European Court of Human Rights, which considers freedom of speech of paramount importance and defends it thoroughly, makes an exception for the denial or trivialization of the Holocaust,” the court said.

The court also imposed a 2-year probation period on the AEL.

The cartoon shows two men in Auschwitz looking at several dead bodies. “I don’t think they are Jews,” says one man. The one man replies: “We have to get to the 6,000,000 (figure) somehow’. Six million Jews were killed during the Holocaust.

The Dutch group says it had no intention of disputing the Holocaust, but wanted instead to highlight what it described as double standards in free speech.

The AEL circulated it in 2006 after a Danish newspaper published a cartoon of the Prophet Mohammad which triggered an outcry among Muslims in many countries.

This is the cartoon for which the AEL was prosecuted:

We covered some of the issues in this case in an article on this blog when it was initially brought last year. As we pointed out then, the AEL’s explanation – that they did not deny the Holocaust, but just published the cartoons in response to the Danish newspaper cartoons of Mohammed – suggests a cynical politics that can only be divisive, inflammatory and harmful. It also suggests an attitude that Holocaust Denial is a legitimate tool to be deployed in mainstream political debate.

At the time that the AEL published this cartoon it was run by its founder, Dyab Abou Jahjah, who has since left to join the Iranian-run International Union of Parliamentarians for Palestine (IUPFP). At the time, he defended the AEL’s use of Holocaust Denial in strident terms:

You don’t even have to go that far, I would be curious to see the reactions of these champions of the freedom of speech  in case that same Danish paper would have published pictures of Jewish rabbi’s, or Moses for that matter, with a Jewish nose, the star of David and represented him as a greedy banker, or other form of economical parasite sucking the blood of the people referring to stereotypes on Jews. Or of King David with the same typical Jewish features and outfit conspiring together with other Jewish prophets to dominate the world inspired by the protocols of the Elders of Zion.

Yes Arabs and Muslims are uptight when you touch their religious and national symbols, but Europe had made of political correctness and the cult of the Holocaust and Jew-worshiping its alternative religion and is even more uptight when you touch that. Europeans might not respect their flags, and they might laugh with Jesus and Mary but if you touch their new religious symbols, they will bombard you with indignation and persecute you in the best European inquisition tradition.

I am for the absolute freedom of speech everywhere, and that’s why I call upon every free sole among Arabs to use the Danish flag as a substitute for toilet paper. To illustrate every wall with graffiti making fun of everything Europe holds as holy: dancing rabbis on the carcasses of Palestinian children, hoax gas-chambers built in Hollywood in 1946 with Steven Spielberg’s approval stamp, and Aids spreading fagots. Let us defend the absolute freedom of speech altogether, wouldn’t that be a noble cause?

Last year, Abou Jahjah was twice invited to London, to speak at meetings organised by the Stop The War Coalition and IUPFP. The first time, he spoke in person; the second time, having been excluded from the UK, he spoke via video link, courtesy of Hizbollah’s al-Manar TV. His exclusion was contested by Jeremy Corbyn MP, who spoke alongside him on his visit to London. Now that the AEL has been convicted of Holocaust Denial under Abou Jahjah’s leadership, will the STWC and Jeremy Corbyn still consider Abou Jahjah a suitable person to work with?

The STWC meeting at which Abou Jahjah spoke alongside Jeremy Corbyn MP, and the rest of the STWC was covered by Harry’s Place here.

Here is Jeremy Corbyn MP on the platform:

Here is Abou Jahjah claiming that Jeremy Corbyn MP was ‘filing a complaint’ against his exclusion. Would anybody like to find out from Jeremy Corbyn MP whether he is continuing to lobby for the admission of this racist into Britain? 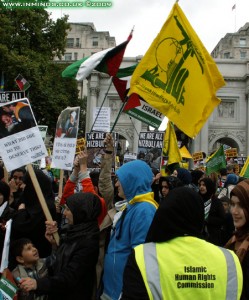