Here is a biting comment on President Obama’s rhetoric on Turkey from Burak Bekdil, writing in the Turkish newspaper Hurriyet.

For Bekdil, Obama’s praise of Turkey’s “Islamic democracy” is no way to argue for the country joining the European Union, which is something Obama supports:

So, Washington is telling Europeans that they should accept ‘a great Islamic democracy,’ not a democracy, into their wealthy club.

The Turkish charity IHH, which the New York Times reports today is very close to Erdoğan and his Justice and Development party, is a case in point:

For Mr. Erdoğan, Bülent Yıldırım, the (Turkish) İHH’s president, is a humanitarian aid activist. In 2006, Mr. Yıldırım highly praised Shamil Basayev, the Chechen rebel-turned-Islamist terrorist, on his death. Basayev claimed responsibility for the 2004 Beslan School siege in which 350 people, mostly children, were killed. Mr. Erdoğan, who is very sensitive about children’s deaths in Gaza chose muteness when schoolchildren were killed in Beslan. They were not Muslim. But our democracy is Islamic, so religiously discriminative sensitivity to children being murdered is all right.

This is the Turkey Mr. Obama thinks is fit for EU membership. An honest European politician would only tell Mr. Obama that Turkey’s accession will be perfectly fine “only after Turkey has transformed from an Islamic democracy into a democracy.”

IHH’s reaction to the death of Basayev is available on the charity’s own website:

A protest was organized in front of the Russian consulate in Istanbul after Basayev’s murder. A number of NGOs, including the IHH Humanitarian Relief Foundation (IHH) and Association for the Rights of Freedom of Thought and Education (Özgür-Der), laid black wreath in front of the consulate. 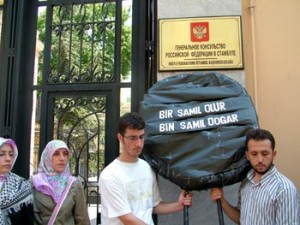 The resistance is ongoing and seems unlikely to end under current conditions. It is impossible to end the resistance as long as Russia doesn’t recognize Chechen nation and give allow displaced Chechens to return to their country. Late Cevher Dudayev once said “every Chechen is a commander.” There is a horde of Basayev in Chechnya. The Chechen cause didn’t die with the death of Shamil Basayev. 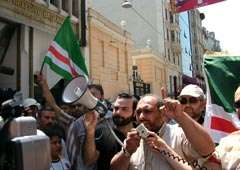 Yildirim, the president of IHH, speaking at the demonstration for Basayev 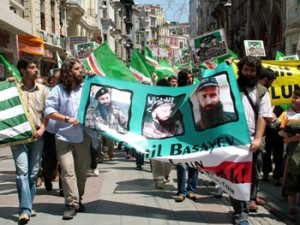 The demonstration ended with prayers for Basayev. Yes, prayers.

The US government is considering designating IHH as a supporter of terrorism. It is a long process, but work is underway at the US Treasury and the State Department.

IHH has already made the case against itself in an expert manner. After all, its Gaza representative Mehmet Kaya has said:

We only work through Hamas

Here is Mehmet Kaya, to the left of Hamas leader Ismail Haniyeh, at a ceremony for the “martyrs” of the Mavi Marmara just this week. 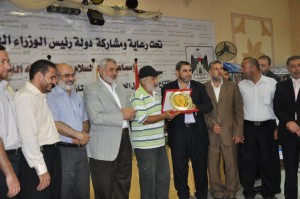 Haniyeh is most grateful to IHH and Erdogan:

Following Kaya’s speech, Ismail Haniyeh expressed his thanks to the PM of Turkey, Recep Tayyip Erdogan and to the people of Turkey for their support to the people Palestine. Haniyeh said “Despite the Israeli threats, new convoys should be organized in order to lift the blockade on Palestine. Turkey’s efforts and devotion to lift the blockade deserve great amount of respect.”

According to media reports, there is some opposition to designation. It is coming from within the Obama administration.