A number of non-Islamist Hamas supporters in the West are often at pains to emphasise the following points about the organisation.

These claims are typically made on the basis of talk of hudnas, and the like. The purpose of the ‘hudna’, of course, is to allow Hamas to build up its strength to a point at which it more effectively pursue its war of annihilation.

Notwithstanding that all of this should be a self-evident, it is often necessary to produce recent quotations from senior Hamas officials which demonstrate that this is so. Therefore, you may wish to bookmark this page, for easy reference. 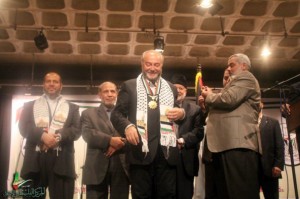 And here is what he has to say:

“We have liberated Gaza, but have we recognized Israel? Have we given up our lands occupied in 1948? We demand the liberation of the West Bank, and the establishment of a state in the West Bank and Gaza, with Jerusalem as its capital – but without recognizing [Israel]. This is the key – without recognizing the Israeli enemy on a single inch of land.

“This is our plan for this stage – to liberate the West Bank and Gaza, without recognizing Israel’s right to a single inch of land, and without giving up the Right of Return for a single Palestinian refugee.

“Our plan for this stage is to liberate any inch of Palestinian land, and to establish a state on it. Our ultimate plan is [to have] Palestine in its entirety. I say this loud and clear so that nobody will accuse me of employing political tactics. We will not recognize the Israeli enemy. ”

“If we could liberate the Negev now, we would continue [our military activity], but our capabilities dictate that after we got rid of the Israeli presence in Gaza, we must finish off the remnants of that occupation, and move on to the West Bank.”

So, now you know.

Incidentally, Zahhar was the chap who expressed the following view, during the Gaza conflict:

Why, incidentally, do non-Islamist Hamas supporters spread the lie that Hamas plans anything other than a war of annihilation followed by the creation of a Iranian-style Islamic state, which would commit genocide, before establishing a regime which would impose terror on its population, murder its political opponents, religious dissenters and gays, while oppressing women and non-Muslims?

The most charitable explanation is that they are fools, who have deceived themselves, and are going on to mislead others. But it is more likely, isn’t it, that this is the future that these Hamas advocates actually hope will come to pass.

What do you think?