Al Qaeda have had a real boost, today.

A special immigration court said Abid Naseer was an al-Qaeda operative – but could not be deported because he faced torture or death back home in Pakistan.

Mr Naseer, 23, was one of 10 Pakistani students arrested last April as part of a massive counter-terrorism operation in Liverpool and Manchester. 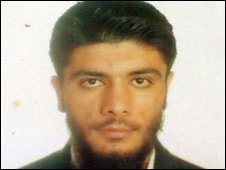 In his judgement, Mr Justice Mitting said Mr Naseer was sending e-mails to a contact in Pakistan – and that the recipient was an “al-Qaeda operative”.

The e-mails were said to be at the heart of the plot and culminated in a message sent to Pakistan in April 2009 in which Mr Naseer said he had set a date to marry, something MI5 said was code for an attack date.

“We are satisfied that Naseer was an al-Qaeda operative who posed and still poses a serious threat to the national security of the United Kingdom,” the judgement said.

It added: “Subject to the issue of safety on return, it is conducive to the public good that he should be deported.”

The judge said Ahmad Faraz Khan had become a “knowing party” to the plan because he had “undergone a radical change in view” between leaving home and studying in the UK.
But in both cases, Mr Justice Mitting said it was impossible to return the men to Pakistan.

“There is a long and well-documented history of disappearances, illegal detention and of the torture and ill-treatment of those detained, usually to produce information, a confession or compliance,” said the judgement.

Turning to the three students who have already left the UK, Mr Justice Mitting said Abdul Wahab Khan and Tariq ur Rehman were committed Islamists who knew of Mr Naseer’s plan.

But don’t worry – the Government has everything in hand.

The home secretary, Theresa May, said: “We are disappointed that the court has ruled that Abid Naseer and Ahmad Faraz Khan should not be deported to Pakistan, which we were seeking on national security grounds. As the court agreed, they are a security risk to the UK. We are now taking all possible measures to ensure they do not engage in terrorist activity.”

In a blaze of publicity, armed police swooped on 12 Pakistani Muslim students in Manchester and Liverpool on April 8th. The Prime Minister boasted of a major terror threat being foiled. In spite of no evidence being found and no charges being brought, 11 of the 12 are still being held in custody, awaiting deportation. Instead of an apology, they are being held in Category A prisons.

It is no coincident that these Pakistani students were picked up just as we see the acceleration of the war on terror into Pakistan. These raids are an extension of the war on Terror being fought in Afghanistan and Pakistan.

Not only because of the unjust treatment they are suffering, not just because these actions are fuelling Islamophobia, but because this is yet again another example of an attack on all our civil liberties.

And, if it still exists, Respect will be overjoyed as well.

And of course, Asim Qureshi from Cageprisoners – who has spoken out against the arrests, detention and proposals to deport these jihadists – must be hugely chuffed. Ditto their “support group“.