The anti-Roma, antisemitic far-right Jobbik party made a depressingly strong showing in Hungary’s parliamentary elections, taking 16.7 percent of the vote and 26 seats.

Jobbik, which burst onto the political scene last year with a nationalist platform blaming Gypsies and Jews for many of the country’s problems, claimed that only a series of scandals about some of its candidates created by the media prevented it from overtaking the Socialists.

“Despite the strong headwinds, Jobbik has managed to double its voters over the past year,” Jobbik president Gabor Vona said after preliminary results were announced by the National Election Office. “I still feel, however, that two-thirds of Hungarians are Jobbik supporters but don’t know it yet.”

To varying degrees, Jews and Gypsies have traditionally served as scapegoats in Eastern Europe for resident majorities during hard times. Jobbik has been able to inflate the traditional, relatively small base of extreme nationalist and anti-Semitic supporters with voters from Hungary’s struggling country villages where the lack of jobs and poverty-related thievery has exacerbated tensions with Gypsies, or Roma, as they are also called.

Jobbik’s rise also has been aided by the popularity of the Magyar Garda, or Hungarian Guard, an extremist group whose uniforms are reminiscent of those worn in the 1940s by the Arrow Cross, Hungary’s infamous wartime Nazi party.

The Garda was co-founded by Vona, the Jobbik leader, although he is no longer an active member. It was disbanded last year by the courts for breaking laws governing the operation of groups and associations, but it continues to exist under a new name.

The Garda’s most confrontational actions have been a series of marches through small countryside towns and villages meant to intimidate their large Gypsy populations and stop what Jobbik calls “Gypsy crimes” — mostly petty thefts too numerous and considered too minor for police to deal with.

An unprecedented series of Roma killings in 2008 and 2009 claimed six lives in several villages, reflecting the depth of hatred against the minority.

Dr. Moshe Kantor, President of the EJC, called the results a real blow for tolerance in Europe. “This is an example of the political fragility of certain societies in Europe,” Kantor said. “As a result of the economic crisis, certain extreme parties are able to deliver a scapegoat upon which to blame all their ills.”

“Just as 65 years ago, the Jews were targeted an blamed for all of society’s ills, sadly in 2010 we see a recurrence of this obsessive anti-Semitism that is sadly growing and gaining power and respectability across the continent. We, the Jewish People, with the decent people of Europe need to conduct a major offensive against hate in Europe.”

I wish it was possible to discredit Jobbik and its supporters by making fun of their hats, but I’m afraid it’s going to take a lot more than that. 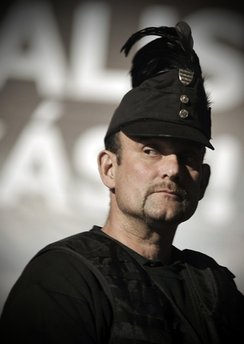