These students disagree with the decision. They do not want to share space with worshippers of any other faith. So they set themselves down in Northampton Square for prayers.

Well, the university’s Islamic Society (ISOC) is among the UK’s most radical. It has even issued threats to the student newspaper, The Inquirer.

The City University Islamic Society has caused controversy this week after two website posts were published and quickly deleted including one that defended radical Islamist cleric Anwar al-Awlaki. A second post entitled “Words to be written in gold” strongly condemned the the Inquirer newspaper over the reporting of homophobic Islamist preacher Abu Usamah’s visit to City University in November, warning of “severe and painful punishment” for the reporters of the newspaper.

Tomorrow the ISOC launches its “Justice Week”. This is from the announcement:

We are also aiming to fundraise at the stalls and the events for an organization that helps the families of Muslim prisoners of war, such as Hhugs.

Hhugs is a charity that supports the families of convicted and suspected terrorists. It works closely with Moazzam Begg’s Cageprisoners.

Note the ISOC’s “prisoners of war” line. Evidently it has chosen sides in what it regards as a legitimate struggle.

This is not the first time. Al Qaeda preacher Anwar al Awlaki is indeed a hero to City ISOC and his opponents are “monkeys”. When there were reports Awlaki may have been killed in December, this is the message they posted on the ISOC website (it has since been deleted):

May Allaah protect him and the Muslims.
…
What evidence is there that Imaam Anwar al-Aulaqi was present in that gathering in the first place?

This was a gathering of staunch al-Qaa’idah soldiers from what I have read… why would Imaam Anwar al-Aulaqi be there in the first place? This is just a delusion that the media managed to pull before the ignorant’s eyes by their careful choice of wordings.

Not only that, those killed in the raid were not only soldiers, but also amongst them many women and children – may Allaah have mercy on them.

How do the prancing monkeys feel about rejoicing at the thought that “santa” gave them a grande christmas present – the death of al-Aulaqi?

Muhammad is no more than a Messenger, and indeed (many) Messengers have passed away before him. If he dies or is killed, will you then turn back on your heels (as disbelievers)? And he who turns back on his heels, not the least harm will he do to Allâh, and Allâh will give reward to those who are grateful.
[Aal Imraan (003:144)]

This is what Allaah said about His last and final messenger, the best of creation. There are many others like al-Aulaqi, and if he dies a hundred more like him will arise, alhamdulillaah [praise to God]. So what is there to grieve about, when Allaah will grant him what he prays for?

The ISOC also posted this tape reminding people not to trust anyone in the media, not even al Jazeera, and to stay true to Awlaki for Islam.

For Awlaki supporters, who better to have round during “Justice Week” than Asim Qureshi of Cageprisoners? That outfit finds Awlaki “inspirational”.

Qureshi still bangs the “root causes” drum, as you will see in this article about jihad published on the Cageprisoners website in January 2010:

The rationale or the ‘why?’, however perverted, that led to the tragic decisions by Abdulmuttalib [the undie bomber] has once again been ignored completely. Despite his own admission that foreign policy has played a crucial role in his decision making process, this factor has been put aside as governments and the media seek to present ‘how’ he came to take such actions.

Another of Qureshi’s solutions is yet more talk about jihad:

The reason why the Jihad v Terrorism talk at UCL was arranged, was because it was felt that the time had come to really address an issue that young Muslims are very much struggling with – it was something that needed to be spoken about in order to help clarify the differences without simplistic statements of condemnation that do not convince anyone.
…
Wider than these conferences -it is important for Muslims in the UK to be given the space to speak about jihad at conferences, in the mosques and at demonstrations. There has been much misunderstanding as to its meaning, far too often the concept is mischievously misinterpreted for nefarious purposes. As a concept it is extremely important for Muslims as it is used as the term that defines the defence of Muslim countries/people against foreign occupying forces. Only by opening up the debate about jihad in the mosques will Islamic scholars find the space to really begin challenging the ideas of Muslims who are confused of the rights and wrongs.

Yes, I suppose this speech from 2006, for example, could be “mischievously misinterpreted” as Qureshi supporting the murder of British troops in Iraq and Afghanistan:

Another “Justice Week” speaker will be Murtaza Khan of Undercover Mosque fame (a transcript is available here).

Like Uthman Lateef, he worked Awlaki fan circles well into 2009, appearing at the “End of Time” Awlaki event on January 1 at the East London Mosque’s London Muslim Centre and another meeting at the Brady Centre in Tower Hamlets in April 2009. 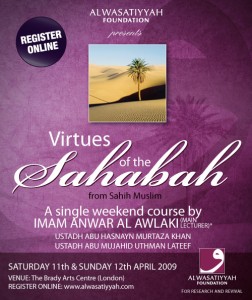 Remember that Khan thinks Jesus wants gays dead, just as he does, as reported here.

Let’s take a look at a few other views Khan has pushed in his furious tirades at mosques and ISOCs around the country.

Khan is a 9/11 troofer. In the midst of a typically spiteful separatist assault on the west, he says:

We [Muslims] did not take down the Twin Towers. You [non-Muslims] yourselves took them down. So in your disguise of “war on terror”, you will kill your own people, because you don’t care about them.

In the same speech, he claims sharia is great for Jews and other non-Muslims.

History has testified, when the sharia was implemented, non-Muslims lived under our rule better than the way you treat them today. That’s a fact. You call us antisemitic, you say you hate al Yahood [Jews]. When Jews were persecuted, where did they run to? They fled to al Andalus, they fled to the Maghreb, where the Jewish community still live there today.

Murtaza “Jesus wants you to kill gays” Khan really is woefully ignorant. Hundreds of thousands of North African Jews fled their countries for Israel or Europe after 1948. The communities that remain today are tiny.

Here he is on women who use perfume:

Read about the companions [of the prophet] when they done these actions. They were strong enough to say “whatever the sharia says, I am ready to take that punishment”. That woman who got stoned to death, when some of the blood went here, there, and some of it landed on some of the companions and they reviled her, evil woman, evil blood on my face, what did the prophet Mohammed say about this woman? The tawbah [repentance] that she’s done, if it had been spread over 70 men of Medina, it would cover all of them and beyond that, meaning she was ready to take the punishment that she’s done.

But yet we find today a loose environment amongst Muslims and a loose understanding. Do whatever you want to do and then go and get married. A destructive and an evil sin.

On Yvonne Ridley, the Taliban, “fornication” and “cattle”:

Yvonne Ridley is the greatest testimony that when you claim about Taliban and the oppression that they commit you had your headlines ready when she was coming back to this country. The headlines were ready. “Oppressed by militants. Malicious individuals. Barbaric people.” And when they asked her the simple question “How was you treated?” she said “Well I was treated quite well by these people”. And after that she testified and she became a Muslim.

So there’s no barbaric nature in Islam. Real Islam teaches women how to conduct themselves, how to behave inside society. So our mothers, our daughters, our sisters, our wives are precious to us. We don’t just let them go out with any man and whoever they find on the street. Come home and say to their parents ”I am going out with so-and-so”. That’s your culture. You do whatever you want to do, son. That’s not our culture, that’s not our way of life. That’s how you find that the evil in society at the moment, the corruption of AIDS as we mentioned in society, is because people are fornicating like dogs and animals. Excuse the expression, but that’s the real fact. You’re behaving worse than animals.
…
You don’t have no understanding of life. They’re like cattle, nay, they’re more astray than cattle.

More on stoning, and flogging too:

The fornicating woman and the fornicating man, flog them 100 times. The sharia says flog them 100 times and to send them out of the land for one year.
…
Why is the punishment for a married individual more harsher than for a young man, or a man who has not been married before, etcetera, or a woman. It’s because the married man has that form of release. And the woman as well. So the punishment for them becomes stoning to death.
…
We need to begin to think about these concepts of what is the final end, even though we know that we are not living under sharia at the moment, so these things cannot be enforced. But bear this hadith [narration of words or deeds of Mohammed] in mind.

On the evils of “free mixing” of men and women:

Luridness. Promiscuity. Free mixing. Sexual interaction. Laughing. Joking. All of this with the opposite sex is nothing but evil things.
…
The thing that destroys many of our youth in this country is women have destroyed them. Their lusts and their desires take them away from the deen of Allah.
…
We’re not harsh. We don’t need to speak to no woman who’s not a mahram [kin whom one may not marry] towards us. That’s the way we should be. That’s the way Muslims should be. This flirtatious speech that you find among sisters, the way they talk to a man. That’s not the speech of the ummah of the believers. Never ever deceive your voice in front of a man. Even though we know that a woman’s voice is not awra [nakedness], but if you deceive your voice, treachery! This sort of love and affection, then that’s forbidden according to the sharia. You speak according to the Qur’an, you speak clear words, and words even full of harshness to a man who is not related to you.

As for this flirtatious behaviour, even under the disguise of Islamic seminars, the way that people speak to one another, it is against the sharia given to the prophet Mohammed. It is the deception of the devil.
…
People might say “you’re harsh”, “you’re rude towards women”. I don’t care if I’m rude towards women who have got nothing to do with me.

Now there’s a man who is a perfect fit with the ridiculous, obnoxious and nasty people who run City ISOC.