This is a crosspost by efrafandays 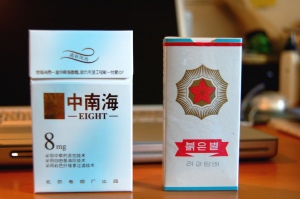 I have no idea if Alejandro Cao de Benos de Les y Pérez, Noah Tuckerand Andrew Murray smoke, but if they do, solidarity would dictate a North Korean brand (seen on the right). Although import of such luxury items to North Korea is advized against by the UN, individual countries are able to set their own advice.

In 2001, the Arnold Hammer-like British American Tobacco went into partnership with Korea Songyong Trading to form Taesong-Bat, and with little fanfare established factories in North Korea: although BAT sold its share in 2007, it continues to import its State Express 555 brand for domestic consumption.

It is to be assumed that any economic partnership is with the anointed ones of Kim Jong Il, but as repugnant as the regieme is, I can see that cigarettes might represent one of the few pleasures open to Koreans north of the 38th.  Yet my sympathy does not extend to attempts to divert BAT products for re-sale on external markets in order to generate hard cash, as reported by theFinancial Times (subscription may be required, although NK Econ Watch reproduces it).

BAT, to its credit, has investigated and taken action against its Singaporean distributor following these events in 2009.  But, if the DPRK was seeking foreign currency then, they certainly need it now after the deranged currency ‘reform’ in November 2009 which rendered worse-than-useless many Koreans’ life-savings (they had to buy matches to burn it).

Some realization appears to have seeped through the Ultra Matte White screen which separates Kim Jong Il from reality, and a rare apology was issued in February 2009.

Monk Beopryun of Good Friends claims that in the period since this Great Confiscation, some two thousand Koreans have died of starvation.  Although the country was not the best fed in the world, at the same time as said apology, the Cosun Ilbo reportedthat food riots were breaking-out: such as at Puryong-Gun where at least one individual was killed whilst attempting to offload rice being imported from China.

Given that China has now leased a pier at Rajin, these wretched souls look as if they are in it for the long-run (and cannot expect much attention from Andy Newman).

Ricky Gervais Alejandro Cao de Benos de Les y Pérez y Cacacacacacacacac can be seen below, looking like the one who has at least 12 full meals a week. 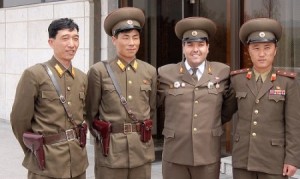