This has appeared on the website of the “Stop the War Coalition”: 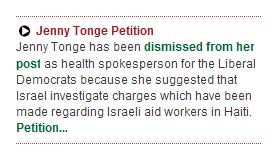 The petition was set up by the hate publishers of the Palestine Telegraph.

They are the purveyors of the version of the Haiti blood libel that Tonge read. It prompted her to call for an “inquiry” in response to obvious racist lunacy. The article is still up on the Palestine Telegraph website.

The petition is a pitiful whitewash of that libel:

We, the undersigned, object to the dismissal of Baroness Jenny Tonge from her post as health spokesperson for the Liberal Democrats simply because she suggested that Israel investigate charges made against it.

The party’s action is a serious threat to the principles for which our country is known — democracy and free speech. Even more specifically, it makes a mockery of your party’s claim to “give power back to people.” Instead of encouraging openness and the search for truth no matter how uncomfortable the accusation or who is accused, you are demonstrating to your constituents that the powerful and the “status quo” will be protected.

The comment for which you are punishing Jenny Tonge merely illustrated her commitment to your party’s founding principles. An independent investigation would be the most ethical response to serious charges that Israel is continuing to practice an illegal act (organ theft) that it has already admitted to committing in earlier years.

By firing Baroness Tonge instead of backing her call for an investigation, or at least supporting her decision to do so, you make evident that the party only believes in the search for truth when powerful allies are not involved.

Please demonstrate that the Liberal Democrats are indeed — as your Web site states — “brave enough to make a fresh start.” Reverse your decision and reinstate Jenny Tonge.

No wonder they’re batting for her. Tonge is still listed as a patron of the Palestine Telegraph, alongside Lauren Booth.

Signatories can add comments to the petition. Here’s Yvonne Ridley, lackey of the Tehran regime and patron of Moazzam Begg’s Cageprisoners:

Nick Clegg is somebody’s puppet – if you live in Birmingham or East London vote RESPECT in the elections … teach Clegg a lesson that this sort of toadying to the Zionists is going to cost him votes.

Baroness Jenny Tonge was an amazing Ambassador for Lib dems and to treat her like this is disgraceful.

She was not making an accusation, she was merely calling for an investigation … bear in mind Israel’s previous history with regard to illegally harvesting organs, it was a legitimate concern

Israel is the global organ harvesting leader, documented and proved. Why else would it be in Haiti? It never offers humanitarian aid, ruthlessly oppresses Palestinians, and murders them willfully.

Do you think its leaders give a damn about poor Haitians? Do you think they came for any reasons but their own? Do you think criticizing one of your own’s honesty can be justified? Petition signers like myself think otherwise.

Jenny is a tribute to the few political figures in this country who have strong ethical and moral values. She has given so much to Palestine and she deserves better treatment that this. I have on two other elections voted LibDem but now anymore. This shows all MP’s are fearful of the Pro Israeli Lobby or wish to protect their own election funding. Shame on Nick Cleck, Ming Campbell, Charles Kennedy and all other MP’s in the LibDem’s you have now been added to my rogues gallery of scumbags!

Do have a look at other “views” added to the petition if you want to see contemporary British antisemitism on open display.

It is no surprise at all to see the “Stop the War Coalition” leap into this racist gutter.