I’ve recently obtained a statement from al-Qaeda in the Arabian Peninsula (AQAP) claiming responsibility for the abortive terrorist attack on Delta airlines last week. I’m replicating the statement below for readers of this blog, interspersed with my own commentary.

Urgent Statement, by Al-Qaida in the Arabian Peninsula

Operation by the Mujahid brother Omar Al-Farooq the Nigerian

Praise be to Allah who says:

And fight them until there is no more Fitnah (disbelief and polytheism: i.e. worshiping others besides Allah) and the religion (worship) will all be for Allah Alone.

And peace and blessing be upon the seal of the Prophets….. To proceed:

With the grace of Allah alone the heroic martyrdom bomber brother Omar Al-Farooq managed to carry out a special operation on an American Airplane, from the Dutch city Amsterdam to the American city Detroit, and this happened during the Christmas holiday, Friday December 25, 2009. He managed to penetrate all devices and modern advanced technology and security checkpoints in international airports bravely without fear of death, relying on Allah and defying the great myth of American and international intelligence, and exposing how fragile they are, bringing their nose to the ground, and making them regret all that they spent on security technology.

Interestingly, I’m told by senior security officials that AQAP has bought airport screening equipment which they are using to find weaknesses in the existing technology. It has been reported in the German press here.

The unity of faith and the Islamic brotherhood that prompted the young man from Nigeria , the Mujahid brother Omar al-Farooq to respond directly to the American aggression, the oppressor against the Arabian Peninsula, and that with the grace of Allah through direct coordination with the Mujahideen in the Arabian Peninsula after the brutal bombing using cluster bombs and cruise missiles launched from U.S. warships in the occupied Gulf of Aden on the Yemenite tribes in the Abyan province and the last attack on Shibuya, and killing dozens of Muslim women and children and entire families were also killed, and these operations were coordinated from Yemen, America, Saudi Arabia and a number of neighbouring countries.

The Mujahideen in the manufacturing department managed with the grace of Allah to make an advanced IED. The IED has been tested and proven effective and passed through the detector ports. The martyrdom bomber managed with the grace of Allah to reach his target, but due to a technical error the IED did not explode completely, and we will continue on our path until we get what we want, and all worship is devoted to Allah alone.

The last part of that statement is highly significant – ‘and all worship is devoted to Allah alone’. It cannot be stressed enough that jihad is, for al-Qaeda, an act of worship. Indeed, they would argue it represents the pinnacle of faith. The failed attack on Delta airlines must be seen in this context.

We call on every Muslim who feels any jealousness for their religious beliefs to remove the polytheists from the Arabian Peninsula, by killing all of the crusaders working in embassies or otherwise, and to declare war against the crusaders in the land of the Prophet Muhammad – peace be upon him – on the ground, sea and air.

And we call on every soldier working in the crusader armies and puppet governments to repent to Allah and follow the example of the heroic Mujahid brother Nidal Hassan, to stand up and to kill all the crusaders by all means available to him supporting the religion of Allah and to make the word of Allah most supreme on earth.

Hence, we say to the American people; as you support your leaders and are standing behind them to kill our women and children, rejoice for what is coming to you, we will come to you with slaughter and we have prepared men who love death as you love life, and with the permission of Allah we will come to you with something you have never experienced before, and as you have killed us, so shall you be killed, and that tomorrow for its seeker is close.

This kind of direct appeal to civilian populations has become a common – and worrying – theme in al-Qaeda statements over the last few years. Previously al-Qaeda only addressed Western leaders, before broadening the scope of their appeals to everyone in the West, hoping to incite them to pressuring their governments into appeasement. Of course, this strategy has reaped dividends for al-Qaeda with large parts of officialdom (and the Left) arguing we should concede to the demands of the terrorists.

Those who are bent on wrong doing will in time come to know how evil a turn their destinies are bound to take!

O Allah make brother the Mujahid Omar al-Farooq steadfast on the truth, and sent down to him inner peace and patience and persistence. O Allah remove his misery and his problems. O Allah remove him soon from his current situation as he never expected to be removed from. O Allah free him and all the Muslims east and west from prison, without leaving the path of the truth, and let them leave prison steadfast on the truth with Your mercy, O Most merciful. O Allah grant victory to the righteous servants, the Mujahideen, everywhere and defeat falsehood and the people of falsehood. All praise be to the Lord of the Worlds.

There is a broader point to make here too. Every opponent of the Iraq war and those who insist we should withdraw from Afghanistan must accept the reality of what they propose – a surge in terrorist attacks against civilian targets and populations. Iraq was described as the ‘fly paper’ strategy, giving the global jihad movement a target against which it could fight and dissipate its efforts. Ricardo Sanchez, commander of U.S. ground forces in Iraq, explained the theory to CNN back in 2003 saying:

This is what I would call a terrorist magnet, where America, being present here in Iraq, creates a target of opportunity… But this is exactly where we want to fight them. …This will prevent the American people from having to go through their attacks back in the United States.

This is the grizzly reality that opponents of our military interventions in Iraq and Afghanistan just will not accept. Since pulling back from Iraq al-Qaeda has gained renewed momentum across the world. The al-Shabab mujahideen are resurgent in Somalia; al-Qaeda in the Arabian Peninsula has returned with greater venom than before – despite having been almost obliterated by a massive Saudi crackdown; al-Qaeda in the Islamic Maghreb (north Africa) is becoming increasingly belligerent again, kidnapping two Italians the other day; while the Taliban and al-Qaeda forces in AfPak have brought Pakistan to the brink of civil war and collapse. No sensible person of conscience can deny this. What is the alternative to a strong and robust military response? 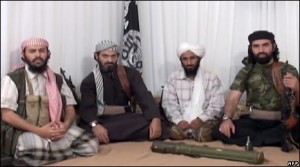 al-Qaeda in the Arabian Peninsula

‘Talk to the terrorists’ cry anti-war campaigners. Perhaps we should. But it begs the question, what is there to talk about? A new book by John Bew and Martyn Frampton, Talking to Terrorists, shows that bringing terrorists to the table almost always requires a strong military response to their activity first. Only that creates the conditions where there is something to talk about.

And, if we aren’t to put our troops on the ground, then what? Drone attacks? The problem with mechanising war in this way is that it is much too indiscriminate. An article in the New Yorker explains why this is less than desirable:

The recent campaign to kill Baitullah Mehsud offers a sobering case study of the hazards of robotic warfare. It appears to have taken sixteen missile strikes, and fourteen months, before the C.I.A. succeeded in killing him. During this hunt, between two hundred and seven and three hundred and twenty-one additional people were killed, depending on which news accounts you rely upon.

Not all those killed were terrorists, but this is the reality of our increasing reliance on mechanised forms of war. It is means less precision and more civilian casualties.

These are the realities that opponents of our military campaigns cannot face: terrorism increases and more civilians – on all sides – will die.

*NB: The al-Qaeda statement about the Delta airliner plot was taken from an al-Qaeda internet forum to which I deliberately decided not to link.