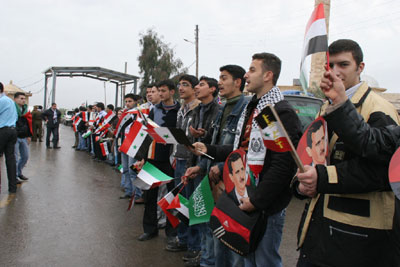 While Iranians in their hundreds of thousands expressed genuine outrage against their rulers, the Syrian government lined up a few dozen loyalists (wielding Syrian and Hamas flags and photos of he who must not be criticized) to dutifully welcome the Viva Palestina convoy to Syria.

Earlier on Sunday morning, the vehicles of the lifeline convoy were warmly received at the Bab Al-Salama border crossing in Aleppo by a number of Syrian officials, people and Palestinian leaders.

In a welcoming speech, Osama Hamdan, the representative of Hamas in Lebanon, said that this aid convoy is the fruit of efforts made by some free men and women from Europe in solidarity with the Palestinian Arab rights aiming at breaking the siege on Gaza.

By the way, Mr Hamdan’s brother Mohammed is Interpal’s partner in Norway.

Hamas can raise as much money and material support as it likes in the UK. Neither the Charity Commission nor the government will stop it.