France on Wednesday led a walkout of a dozen delegations, including the United States, to protest a fiery speech by Iranian President Mahmoud Ahmadinejad to the UN General Assembly.

“It is disappointing that Mr Ahmadinejad has once again chosen to espouse hateful, offensive and anti-Semitic rhetoric,” Mark Kornblau, spokesman to the US mission to the United Nations, said in a statement.

Israel had already called for a boycott of the speech, and was not present when the Iranian leader began his address. Canada had already said it would heed the boycott call.

In his address, Ahmadinejad again took aim at Israel without mentioning the country or Jews by name, referring only to the “Zionist regime.”
…..
Suggesting there was a Jewish conspiracy, Ahmadinejad added: “It is no longer acceptable that a small minority would dominate the politics, economy and culture of major parts of the world by its complicated networks.”

And he accused Jews of seeking to “establish a new form of slavery, and harm the reputation of other nations, even European nations and the US, to attain its racist ambitions.”

The Foreign Ministry of Sweden, however, insisted that Ahmadinejad’s speech did not cross the “red line” that would have prompted a walkout by all EU states. 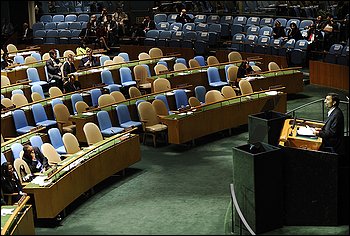 Judging from the photo above, it appears that a number of other delegates took the opportunity to go to the bathroom, enjoy a cocktail at the Delegates’ Lounge or get home in time to watch “Dancing with the Stars.”

Update: Words worth hearing, even if Netanyahu’s speaking them makes it easy for some to ignore.