Socialist Unity’s latest post is designed to provide argument for those who are, for whatever reason, uncomfortable with the thought of political reform in Iran. John Wight is one of them. Here he is explaining why things are much better off left as they currently are in Tehran, Tabriz and Shiraz.

It might at first blush appear strange that an enthusiastic encomium to the teetering theocratic status quo should come from a self-described representative of the western left, but regular readers of Harry’s Place will know that these are the times in which we live: that it is now often members of the left who worry most about political change.

The author goes on to inform us why western socialists, comfortably settled in their armchairs watching events far away unfold on the Channel Four News, should – despite any lingering feelings of solidarity for people demanding a better way of life – be wary of providing support to the demonstrators.

This this an absolute corker:

It is well nigh certain that not all of the protesters who’ve been on the streets confronting the state in recent days have been motivated by economic factors – or at least not solely by economic factors – or indeed support for Mousavi. Within their ranks are undoubtedly many who see this as the opportunity to challenge the very foundations of the Islamic Republic, determined to end the political, social, and cultural restrictions which are part of daily life in Iran, ushering in a new system of government altogether.

A new system of government altogether?  Completely out of the question. How can any right thinking person support such an outrageous and impertinent demand? We’ll be told that Iranian women will be wanting an equal say in the political process next.

No democracy is without its imperfections. Under the Islamic Republic Iranians, no matter where they happen to live throughout the world, have the right to vote in elections. Women are debarred from standing for office, which is certainly regressive in itself. However, this differs from democratic elections in the West only in the sense that debarment here is based on economic status rather than gender. In effect this ensures that only the wealthy within western societies have any meaningful chance of holding high office.

Well, that’s all right then. Women from from less-favoured economic groups in the west have to struggle harder than their wealthier counterparts in order to take part in the political process, so proscribing women from any sort of role whatsoever and shooting them dead on the streets when they dare complain about their legally sanctioned inequality is all part and parcel of the same old same old. As they say, suck it up sisters.

On the bright side Socialist Unity does remind us that the Iranian Constitution has some really quite positive language about the role of our female fellow humans:

The family is the fundamental unit of society and the main center for the growth and edification of human being. Compatibility with respect to belief and ideal, which provides the primary basis for man’s development and growth, is the main consideration in the establishment of a family. It is the duty of the Islamic government to provide the necessary facilities for the attainment of this goal. This view of the family unit delivers woman from being regarded as an object or instrument in the service of promoting consumerism and exploitation. Not only does woman recover thereby her momentous and precious function of motherhood, rearing of ideologically committed human beings, she also assumes a pioneering social role and becomes the fellow struggler of man in all vital areas of life. Given the weighty responsibilities that woman thus assumes, she is accorded in Islam great value and nobility.’

Translation: women have a pioneering role in all vital areas of life as long as they understand this is strictly limited to making sure the menfolk are looked after and the next generation of children is indoctrinated, so don’t get any uppity ideas, okay?

What then does Socialist Unity have to say about the compulsory dress code enforced on all Iranian women?

The attire of women became a major issue. Although it was not mandated that women who had never worn a chador would have to wear this garment, it was required that whenever women appeared in public they had to have their hair and skin covered, except for the face and hands. The law has been controversial among secularised women, although for the majority of women, who had worn the chador even before the Revolution, the law had only a negligible impact.

I love that casual last line. Who cares about the freedom of women to dress how they want? Fashions haven’t changed in the villages for millenia, so those damned Gucci-wearering secularists should stop getting their knickers in a twist.

International solidarity? Surely anyone describing himself as a socialist should take his political cue from the comrades actually in Iran? That’s a long-held basic principle of the left isn’t it?

To be sure, the tragedy of the 1979 revolution in Iran was the purging and near total destruction of the Iranian left in its aftermath by the clerics and their supporters. Thirty years on, then, is it any wonder that voices emanating from the left in Iran are calling for support for the opposition?

Not to me it isn’t, but Socialist Unity says ‘let’s not be too hasty’

As with most seismic events and political upheavals, however, history provides us with a parallel. Just after the invasion of Iraq in 2003 a section of the Iraqi Communist Party decided to cooperate with the US-led occupation. They took up seats in the organ of the interim colonial administration, the Coalition Provisional Authority. After decades of repression suffered under Saddam, perhaps it is no surprise that they would do so. Nevertheless, it was a gargantuan blunder, one which effectively ruined their credibility forevermore among the vast majority of Iraqi people.

Translation: The desperate and isolated Iranian left might be united in pleading for solidarity from the west, but what do these hicks know about the balance of world forces? We know where the real struggle is at. And by the way, we’ve repeatedly pilloried the Iraqi left for daring to participate in free elections – don’t think we won’t do the same to you if you get any ideas above your geopolitical station.

Finally, the usual suspects get a mention:

It is undeniable that the main beneficiaries of what is currently taking place in Iran are presently sitting in Washington, Tel Aviv and London.

Maybe there’s some truth in that Comrade Wight, but is politics really a zero-sum game? Would change in Iran be welcome only to foreigners? Hasn’t he forgotten to mention the other potential beneficiaries ? The people of Iran: women who want political equality, gays who don’t want to end their life with a noose around their neck, members of left-wing political parties currently languishing in prison, workers sick of having to take three jobs just to put enough food on the table.

For too many on the western left such people are all but invisible, their appeals for freedom and justice deliberately unlistened to, their legitimate demands for things we take for granted scorned.

What a crying shame. 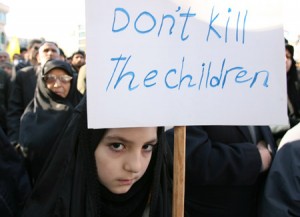